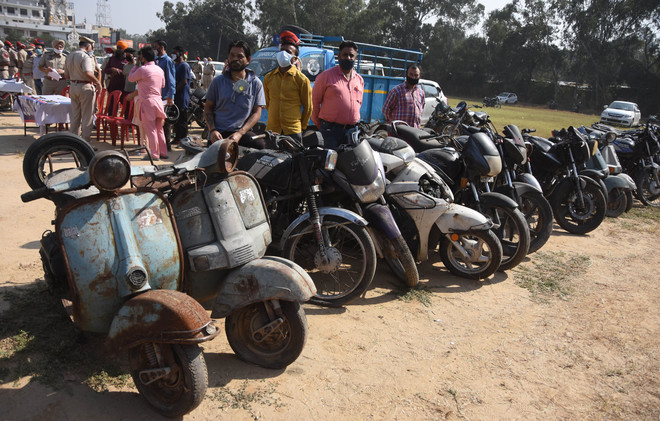 Taking an initiative, the Ludhiana Commissionerate organised a special camp to release impounded and seized vehicles and other items of residents.

Ludhiana Police Commissioner Rakesh Agrawal led the camp organised at the Government College for Girls, near Bhagat Singh Chowk and handed over 239 vehicles, 213 mobile phones, Rs 674, 750 cash to people.The total value of the delivered case properties is around Rs 4 crore.

Of the 239 vehicles, 42 are four-wheelers, nine three-wheelers and 188 two-wheelers.

The CP said the practice would be continued in future in Ludhiana as the next camp would be organised in all police stations in which the case properties would be returned to people.

Maximum cash was handed over to victims in robbery and loot cases by the Police Division 6.

Inspector Amandeep Singh Brar said in the first case, a worker of a firm had stolen Rs 4.80 lakh and the police had solved the case. and handed over the money to the owner. In another case, Rs 2.80 lakh was looted from an elderly man on Gill Road last month in which the police recovered Rs 1.94 lakh after nabbing the suspect and the cash was handed over to the victim.

2,200 unclaimed vehicles to be auctioned on Nov 3

CP Rakesh Agrawal said as many as 2,200 such vehicles are lying at various police stations which have not been claimed by any person. Some, persons did not claim the vehicles as they might have taken claim from insurance companies while others avoid possession due to the legal cost involved in it. As many as 2,200 unclaimed vehicles will be auctioned on November 3. He said first time such a camp was organised where people are handed over their case properties in a simplified way.