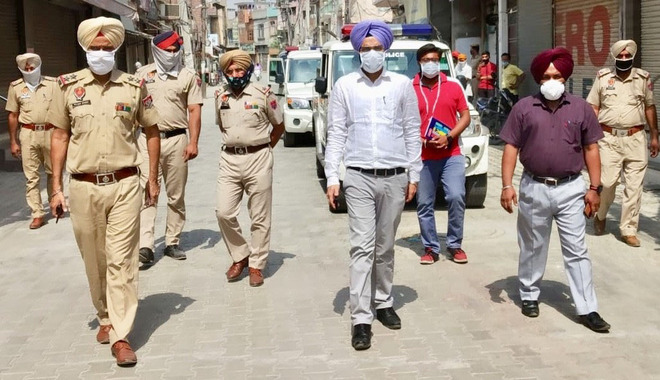 The administration remained on toes to ensure that residents stayed indoors during the lockdown and only essential services were provided to the latter according to the latest guidelines received from the Sangrur Deputy Commissioner, Ramvir Singh. The police also conducted a flag march in the town today.

The Mandi Ahmedgarh Sub Divisional Magistrate (SDM), Dev Darashdeep Singh, and the DSP, Rajan Sharma, asked the rank and file in the civil and police departments to ensure that amended guidelines issued by the DC were implemented in letter and in spirit.

The Mandi Ahmedgarh Sadar SHO, Amandeep Kaur, and the City SHO, Major Singh, said the administration had imposed new and stricter guidelines within municipal limits of the town and rural localities in suppression of the earlier instructions. People were not clear about new relaxations and restrictions, which came into effect today, they added.

Beat officers had to act tough at some places in the town, but they ensured that the lockdown was imposed properly in view of the recent surge in Covid cases, they said.

Some shopkeepers had started opening their establishments on various pretexts while a large number of residents, instead of remaining indoors, ventured out citing flimsy excuses, they added.

However the restrictions were implemented after specially constituted teams of policemen undertook patrolling and conducted a flag march in the town, they said. The SDM led the flag march, they added.