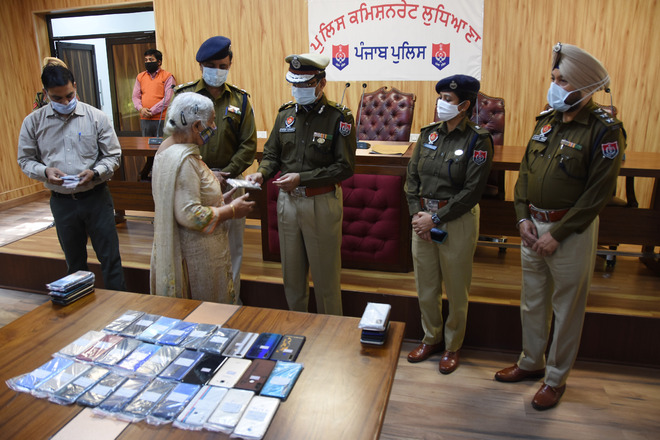 Police Commissioner Rakesh Agrawal hands over a mobilephone to a woman at the Police Lines in Ludhiana on Thursday. Tribune Photo: Himanshu Mahajan

The Ludhiana police on Thursday traced and handed over 61 mobile phones that had been stolen or snatched from various places to their rightful owners at Police Lines here.

On the directions of Police Commissioner Rakesh Kumar Agrawal, Deputy Commissioner of Police (Detective) Simratpal Singh Dhindsa, ADCP (Investigation) Rupinder Kaur Bhatti and other officials of the Technical Support Unit, Ludhiana, had conducted a campaign to trace these mobiles.

Police Commissioner Rakesh Aggarwal handed over the phones to owners today. He also urged citizens to take extra care of their valuables and must inform the police whenever they lose their mobile phone.

The police said its cyber cell has traced these 61 mobiles and all recovered mobiles are smartphones. The owners had informed to the police after they had lost their mobiles. The police then conducted an investigation to trace the mobiles.