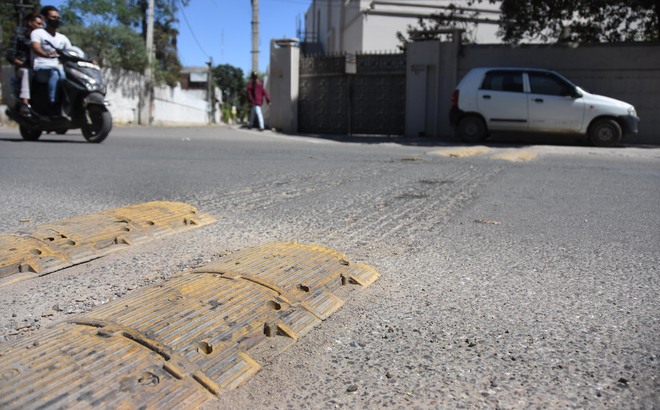 A city-based activist has filed a petition before the Punjab and Haryana High Court against unapproved/illegal speed humps that have been constructed by violating the guidelines. The High Court has issued notice of motion to respondents concerned. The respondents in this case are State of Punjab and others.

Unapproved speed humps have been constructed on various internal and major roads of the city. Such speed breakers are also seen in the areas outside the civic body’s jurisdiction.

The Council of RTI Activists president, Rohit Sabharwal, said, “The lives of people have been put to danger just because of the non-compliance of the guidelines issued by the Indian Roads Congress (IRC) for the construction of speed humps. The matter is related to lives of citizens. It is directly connected to human rights and right to life.”

“I filed the petition demanding that the authorities concerned must take appropriate action to demolish unapproved, unplanned and illegal speed humps, which are not as per the guidelines. It is matter for the interest of the public at large,” he added.

“Major accidents can take place due to these illegal speed humps especially involving people riding two-wheelers. Such illegal speed humps lead to sudden braking and collision with other vehicles, which aggravates chances of fatal injuries and even death of commuters,” he said.

“Moreover, unapproved speed humps slow down emergency vehicles like ambulances, fire brigade and others. They can harm patients in transit like senior citizens and pregnant women. Moreover, these speed humps can injure people suffering from backache and spinal injuries,” he added.

The hearing in this case is schedule for July 16.