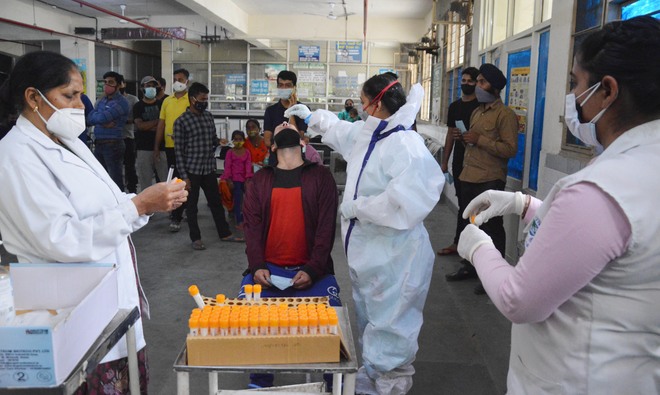 Covid tests being conducted at the Civil Hospital in Ludhiana.

Once again Ludhiana district broke the previous records today and the district saw 835 new cases of Covid. The district had reported 598 positive cases yesterday. This is the highest spike since the outbreak of Covid in March 2020

It was in September last year that highest 7,736 cases were reported in a month, but in April 7,768 cases were recorded in 17 days. The active cases in the district today rose to 4,277.

The number of patients on the ventilator support today was 20, out of which 11 were from Ludhiana district and nine from other districts.

Total positive cases have now reached 42,378, while 1,238 persons have lost their lives in the district so far.

A snake charmer in the city tested positive for Covid. He often used to give unrealistic tips and indigenous prescriptions to people about how to stay safe from Covid.

The snake charmer was tested positive during a special camp organised by health teams at the Lalton Kalan bus stand. The health team asked the snake charmer to undergo Covid test, but he refused and claimed that he could never get the infection as he, himself, provided indigenous prescriptions/medicines to people for keeping themselves safe from coronavirus.

Following the adamant and reluctant attitude shown by the snake charmer for giving sample, the health team with the help of the Lalton Kalan police post staff took sample of the former, who tested positive.