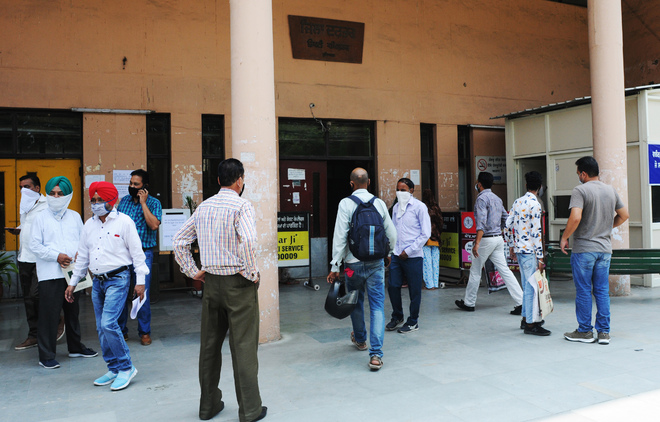 Despite public dealing having been curtailed, people continue to visit the DC office complex on Tuesday. Tribune photo: Himanshu Mahajan

A 40-year-old woman from Vijay Nagar in Ludhiana breathed her last at Oswal Hospital. A 57-year-old man from Iqbal Nagar, Tajpur Nagar, Ludhiana, died at the CMCH. He was referred from Civil Hospital on July 4.

Two patients, a man and a woman from Amritsar and Sangrur, respectively, died of Covid at the DMCH.

Of 61 positive cases, seven are policemen and two belong to judiciary. A local judicial magistrate and her husband have tested positive. A reader in the court of Judicial Magistrate (First Class) has also tested positive.

The seven infected policemen include four ASIs from CIA-1, an ASI from Khanna and the Moti Nagar SHO.

Many people, unaware of the fact that entry to the DC office complex has been curtailed, today visited the office. They, however, were sent back by the security and were asked to either mail their concerns or drop their letters/complaints in the drop box.

“I do not know how to send an e-mail,” said one of the visitors from a nearby village.

Meanwhile, the Health Department has launched an awareness drive in the containment and micro-containment zone. Mass media wing teams are educating people and motivating them to get their sampling done.

The teams suggested people against venturing out and asked them to cooperate with the administration. They were also briefed about FIRs and challans to be imposed on violators.

The Civil Surgeon, Dr Rajesh Bagga, said the teams would collect samples from the containment and micro-containment zones and persons from those areas need not come to hospitals for sampling.