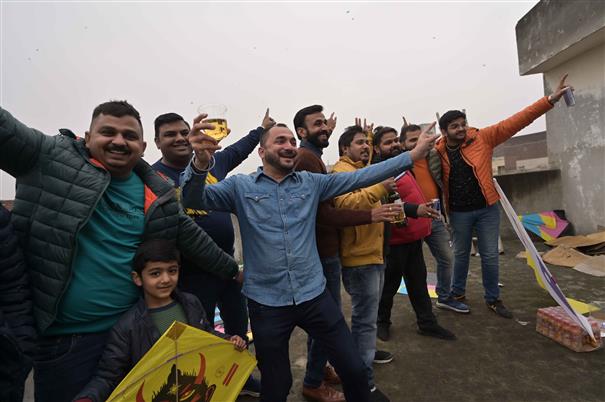 The festival of Lohri was celebrated by residents under the threat of ongoing Covid-19 pandemic. Residents and their families flew kites, a major attraction of the festival, in interior parts and the outer areas of the city. Residents also exchanged messages wishing Happy Lohri to each other on social media, including Facebook, Instagram and Snapchat.

Lohri celebrates the harvest of the Rabi crop and in reverence for the Fire God or the Goddess of Lohri. “Lohri is celebrated with a bonfire, which is a part of its tradition. Distributing ‘reori’, ‘gacchak’ and peanuts remains the main attraction of the festival. Earlier, Lohri was celebrated in grand manner when some wedding would take place or on the birth of boy. With a change in mind set of society, now Lohri is celebrated on birth of daughters too,” said Sukhminderpal Singh, a senior citizen.

Ban on Chinese string goes up in smoke

As the ban on Chinese string was not strictly enforced, it was openly used for flying kites during Lohri celebrations today. Questions are being raised over the role of administration and the police for failing to stop the use and sale of the banned string. The NGT has imposed a complete ban on Chinese string. Commuters especially those riding two-wheelers and pedestrians remain at risk of coming in contact with such strings. Even safety of birds and animals is being ignored.

A city resident Col CM Lakhanpal (retd) said, “The government must enforce complete ban on the sale and use of such dangerous string.” —