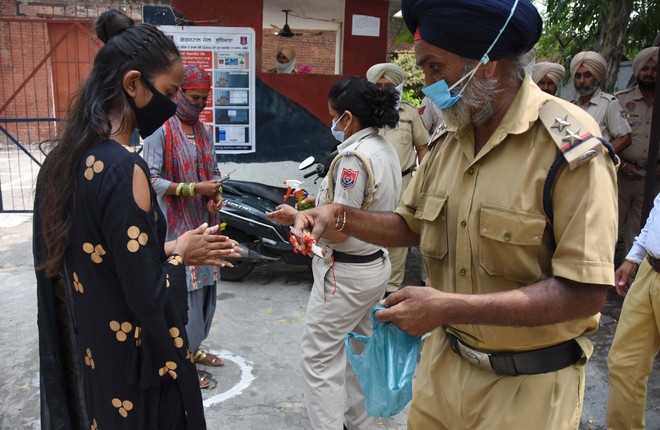 Sisters of jail inmates deposit their rakhis at the Central Jail in Ludhiana on Monday. Tribune photo: Himanshu Mahajan

Rakhi is not just a simple thread but it symbolises the bond between the sister and the brother. Wherever the brother may be, the sister makes sure she reaches to him on this day. Every year, sisters visit their brothers lodged in the Central Jail on this special day. This year, the Covid scare dampened the spirits of the sisters as only a handful of them turned up at the jail.

There are 2,200 inmates in the jail. The sisters of only 90 inmates turned up to tie rakhi today. Although they were not allowed to meet their brothers due to Covid scare this time. A window was set up at the jail where they could submit the rakhis for their brothers.

Superintendent of Central Jail Rajiv Arora said: “Meeting was not allowed this year due to Covid as we have to maintain social distancing. The time for submitting rakhis was fixed from 8:30 am to 5 pm but we wrapped up around noon. Only 90 rakhis were received which were handed over to the inmates”.

“I did not want the wrist of my brother to remain bare on this auspicious occasion so I came especially from Mansa to hand over the rakhi. I am unhappy for not meeting him on this day but then we have to be careful and stay safe,” she said.

A relative of a jail inmate, who had come to handover the rakhi on behalf of the latter’s sister, said: “Not many turned up for Rakhi today as meeting was not allowed. But I am happy that my small act will bring a smile on the faces of both brother and sister.”

Thirtysix jail inmates have tested positive for Covid at Borstal Jail, which is a quarantine special jail for accused.