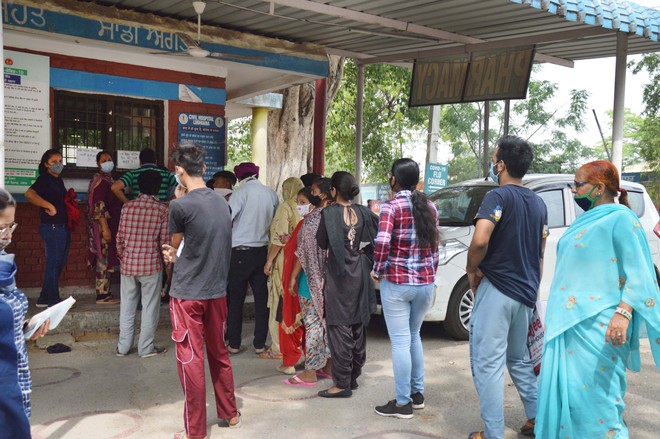 A huge rush is being witnessed at Covid testing centres these days. The number of people getting tested is increasing at government as well as private centres.

A huge rush is being witnessed at Covid testing centres these days. The number of people getting tested is increasing at government as well as private centres.

People having fever and body ache are going for the test before consulting doctor.

The Covid test is also being done at the Civil Hospital and the number of people visiting the hospital for the same has increased considerably.

The Dayanand Medical College and Hospital (DMCH) has a Covid testing centre for the public. Nowadays, it is collecting 500-600 samples daily. Earlier, it was around 200-250.

Earlier, those coming for getting tested at the DMCH centre were mostly travellers. But now, people having mild fever and body ache are also coming for the same.

Dr Ramesh, District Epidemologist, said before the spike in cases, samples collected at Civil Hospital were around 300-400 while these days the figure has gone up to 700-800. Samples collected from the entire district has seen an increase. Daily 7,000-8,000 samples were being sent for testing from the district.

A resident of Aggar Nagar said his wife was having fever and body ache for the past two days and the family thought it was better to get the Covid test done.

“We are also regularly checking her oxygen level at home,” he said.