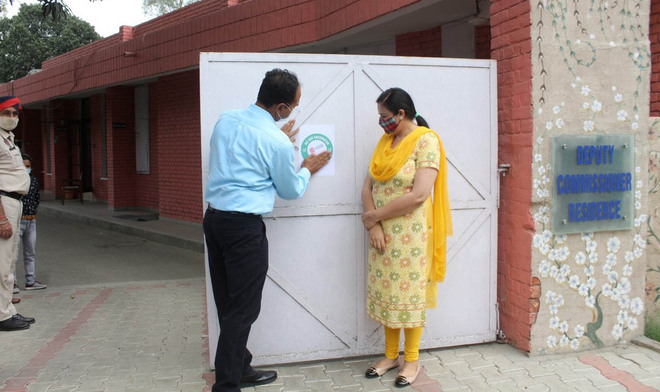 DC Varinder Kumar Sharma and his wife paste a sticker stating ‘We are vaccinated’ outside their residence in Ludhiana. Tribune photo

There was a limited stock of Covishield vaccine left with the Health Department in the city today. Only rural Covid Vaccination Centres (CVCs) were sent the doses of covishield, while in urban CVCs only Covaxin was administered. Beneficiaries coming for the second dose of Covishield in the urban areas had to return without the jab.

Yesterday the stock of Covaxin had arrived in the district and today only Covaxin was given in the urban CVCs. It is expected that the stock of Covishield will arrive tomorrow.

Dr GS Grewal, former president of the Punjab Medical Council, said they were not getting the doses of Covishield and left with no other option the vaccination process had to be stopped till the stock arrived. People coming for vaccination were returning without the jab.

Another doctor from the city said he had paid for 300 doses and managed to get only 100. “After these doses were administered, I requested the department for more doses but was refused the same as there was no stock with the department. As a result I had to stop the vaccination process by noon,” he said.

Jatinder Kaur said she went to get the second dose of Covid vaccine but she has to return without the jab as Covishield was out of stock. “I was asked to enquire tomorrow again about the arrival of the vaccine,” she said.

Another beneficiary, who also went for his second dose today, had to come back without completing the vaccination process.

“Only Covaxin was given to those coming for vaccination. Since my first dose was Covishield, I had to return back without the jab as the hospital did not have the stock and I was asked to come back on Monday,” he said.

District Immunisation Officer Dr Puneet Juneja said they had limited stock of Covishield left with them and were expecting the supply on Sunday. “Today Covishield was administered at rural CVCs while Covaxin was given at Urban CVCs,” he said.