How to deal with the problem of stray cattle roaming on roads? 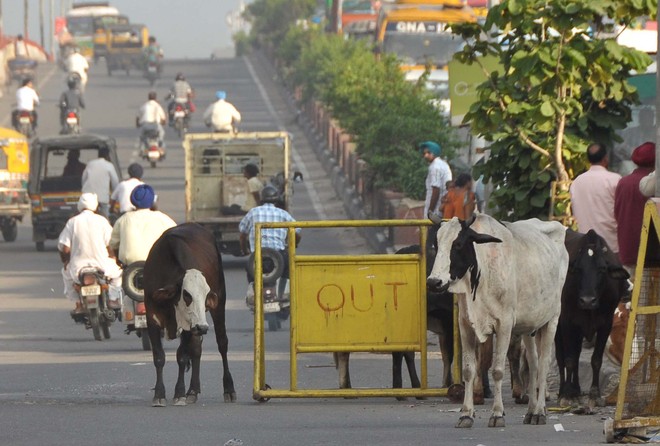 The problem of stray cattle is a major issue in the country. To keep the situation under control animal husbandries of every area should keep a check on stray cattle. If cattle are found on road, they should be immediately taken to cow shelters. The government should make big grounds where stray cattle can be sent. Regular raids should also be organised. Animal management programmes should also be organised. The government should also make rules and regulations regarding the issue so that no more mishaps could take place because of the roaming cattle.

Stray cattle roam around streets and roads aimlessly. They sometimes cause and suffer severe injuries due to accidents. Cattle owners should not let them loose even if they are of no use. They must be donated or sold to local cattle sheds or dairies. The authorities concerned should create adequate infrastructure in this regard.

The problem of stray cattle roaming on the road is increasing day by day. It causes roads mishaps. When cows become old or stop giving milk their owners should not leave them on roads but should handover to gaushalas. It is important that the amount of cow cess should be paid to the authorities so that they can use it properly for the betterment of cattle.

To solve the problem of stray animals in the city, we all must assist with the local government. Residents who are taming these animals should not allow these to roam freely on the roads and streets. There must be some places which should be reserved for stray animals. The government should fix and assign some funds to look after the stray animals which it collects from the residents in the form of cow cess. The entry on the roads must be restricted for these animals.

The menace of stray animals is increasing day by day. It poses a life threat to the commuters. Stray animals are roaming free on roads and streets. Municipal Corporation is doing its best efforts to put a curb on stray animals. The local government along with the help of its residents must put these animals in some specified places and must make arrangements for their feeding. There must be an agency which should monitor these animals at the places reserved for them. Proper care must be taken. Those who are letting these animals must be punished. Fences on both sides of the road must be erected, especially GT Road, and some busy roads in the city.

The problem of stray cattle roaming on road leads to many fatal accidents. Stray cattle even destroy the produce of farmers. The government should take immediate steps to solve the problem. The government should utilise cow cess on the welfare of stray animals. Cowsheds must be maintained by creating proper management or trust. The government should form a separate team of officers on the issue. It must fix helpline numbers so that general public can report about the issue. Disowning of useless/old cattle is also a major issue. Laws must be formulated to curb this issue. Harassment of these animals by general public must be recognised as punishable offence.

Make use of cow cess

Stray cattle often lead to traffic jams and road mishaps. To handle the issue, first of all, authorities concerned should take a strict action against cattle owners. Secondly, the government should make more cow shelters and make good use of money collected from cow access.

The problem of stray cattle is nothing new, but in the past few months it has reached at alarming proportions. Herds of stray cows and buffaloes roam freely on the interior roads and cause traffic jams and accidents. At night, vehicle users cannot spot stray animals, especially on streets with poor illumination. Allowing cattle to roam on the roads will be harmful to the animal as well as the humans. To prevent such incidents, stray cattle should be caught and send to animal shelters. Fine should be imposed on those who set free their cattle on the streets. Cattles should be given special shinning belts so that at night it can glow and the rider can be averred.

The problem of roaming stray cattle on the roads can be solved by sending them to government or private cow sheds. The Municipal Corporation should appoint special teams to catch the stray cattle. These persons can be given some cash incentive and proper equipment. All such cattle heads must be labelled to identify them. If the owners come to take back such cattle, they must not be returned back to the owners without their paying either heavy fine or full charges spent on their food and lodging in the cattle shed for the period they have been retained there. Also, the general public must be educated that these cattle, especially cows and bulls, must not be offered food stuff. Such a practise must be stopped and awareness should be raised in this regard.

The increasing menace of stray animals on roads and in streets must be tackled on war-footing. They should be caught and sent to shelters, especially created for them, in various corners of the city. Here they should be spayed so that they don't reproduce further. Laws to tackle this menace need more teeth and those who serve milk or eatables in open to stray animals should be punished. Such practises should be banned and pet control laws should also be enforced strictly.

Herds of cattle roaming on roads cause traffic jams and road mishaps. Stray animals feeding on heaps of garbage on Jamalpur Road poses a big threat to vehicles passing by, especially two-wheelers. The tendency of accidents has increased on these busy and interior roads. The government should ensure that roads are properly maintained. Though cowsheds are made in certain areas still these are not properly working. The government needs to ensure that cows are not roaming and have proper shelter and food to live. Veterinary doctors need to be appointed and paid by government for the treatment of injured/ill cattle.

The menace of stray cattle is really getting perilous in the city. The authorities concerned need to take stern action against those who let their cattle roam freely on the roads, thereby putting not only their own lives in danger, but also the lives of the commuters. The problem is not just limited to Ludhiana, but also the other cities of Punjab and Haryana as well. The owners of the cattle need to be responsible and try to keep their cattle in order. They should realise that if their cattle turn to be useless due to old age or any other reason, they don't have any right to throw them out of their houses. NGOs and social organisations should come forward and set up gaushalas.

Stray cattle roaming on roads pose a serious problem – they are a threat to road safety. A question arises – why the cattle should be left to roam on roads. The answer is simply that the abandoned cattle are no longer economically productive. But is this the complete answer? Well, not exactly. The abandoned cattle have only ceased to be milk producers. The cattle, however, are not a drain on farmers’ resources if the traditional milk production model is tweaked a bit. And for a change the ‘non-productive’ male calves too can have a productive role. Herein comes the idea of dry dairy farming. It is a different model that uses traditional methodologies for composting cow dung, creation of biogas, creation of biopesticides from cow urine and other green energy initiatives. It can provide avenue for skill development and also thereby provide employment opportunities, apart from making green energy available. The cattle also get their ‘earned retirement’.

In a dry dairy, bovines that are non-lactating can be housed along with male calves. Biogas plants and vermicomposting can provide sustainable agriculture solutions. By the way, how about bullock-powered oil press that can cater to the new-emerging demand for ‘kolhu ka tel’!