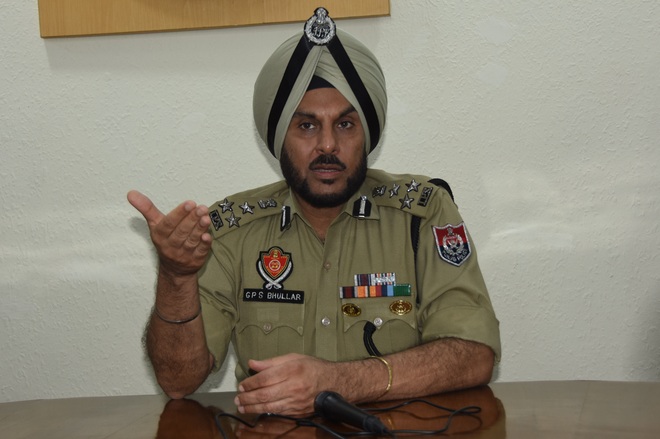 CP Gurpreet S Bhullar interacts with the media in Ludhiana.

New Commissioner of Police, Ludhiana, Gurpreet Singh Bhullar after taking charge on Wednesday said: “My foremost priorities will be detection and prevention of crime in the city, besides stress will be laid on the redressal of people’s grievances.”

Talking to The Tribune, Bhullar said major focus would be given on categorisation of criminals and their surveillance in an effective manner.

He said the tirade against drugs would be further intensified and thrust would be laid to completely wipe out the menace from the industrial town.

Bhullar said all-out efforts would be further made to solve traffic-related problems in the city and the entire traffic management plan of the Commissionerate Police would be reviewed.

The Commissioner of Police said senior officials of the traffic wing would be deployed in the field to ensure that traffic snarls did not create any problem for commuters.

Bhullar asserted that the PCR would be made more responsive to deal with any sort of exigency and making the city more safer for people.

He said public dealing at police stations would be strengthened for which police officers would be made accountable.

“If any one visits a police station he/she must be having some grievance, hence, I will ensure that every visitor at police stations will be given due respect and justice at last. My purpose is to present a human face of policing, so that every resident will say that the police are their friends not enemy,” he added.

Bhullar said adequate focus would be laid on good, responsive and transparent policing for which feedback would be taken from the public.

The CP announced that new initiatives would be taken to ensure the well-being of the police force and their family members. He also said thrust would also be laid on ensuring the security of senior citizens in the city.

Bhullar said firstly, he would study all crucial issues faced by the city and ensure their timely resolution.

Earlier, the Commissioner of Police took salute from the guard of honour given by the Punjab Police on reaching the office. Later, he had detailed deliberations with senior officers of the Commissionerate Police.

Joint Commissioner of Police J Elanchezhian was among those others present.

The CP said if any other district police or any other police cell arrest any big drug smuggler and notorious criminal from the jurisdiction of the city police, the area police station officials concerned could be held accountable. Thana heads must ensure no illegal activity of any kind should prevail in their area, else they might face the music.