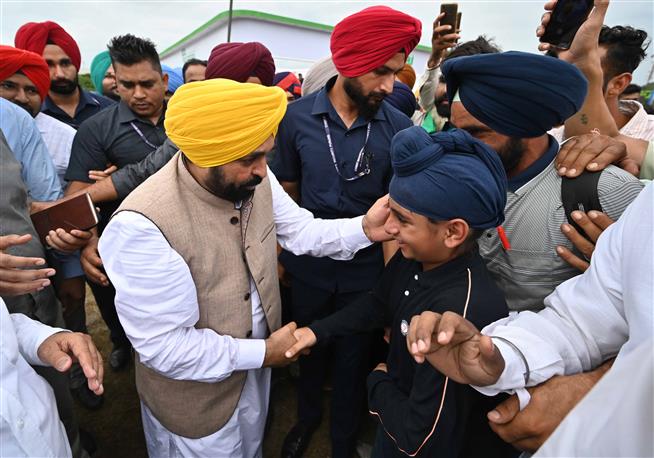 CM Bhagwant Mann talks to a boy at the kisan mela on the PAU campus.

Crop diversification has started showing spectacular results. A farmer’s cultivation area in district has multiplied 28 times from just five acres to a whopping 140 acres through crop diversification during the past less than three decades.

A progressive farmer Satpal Singh Toor of Sawadi Kalan village in Ludhiana district grows potato on 120 acres and cultivates wheat, maize, manthe, berseem, moong and fodder on the rest of 20 acres. He was also into seed production and dairy farming as well.

“I conserve natural resources by using laser land leveller and never burn paddy straw, rather opt for its in-situ management,” a member of several clubs and societies Satpal Singh told The Tribune. He has 62 heads of cattle in his dairy farm.

My father Bahadur Singh owned five acres in 1995. With diversification methods, I was able to expand my cultivation area to 140 acres. —Satpal Singh Toor, Farmer

I cultivate pear, peach and plum on 16 acres as well as spring maize and moong. For irrigation, I use a solar pump. I also cultivate turmeric. —Amritpal Singh Randhawa, Farmer

Not satisfied with the wheat-paddy cycle, I started vegetable nursery. I grow saplings of paddy and kharif onion on my five acre nursery. —Manjit Singh, Farmer

He was among five farmers, who were honoured for excellence in agriculture and allied enterprises by the Punjab Agricultural University (PAU) at kisan mela here on Friday. He was conferred with “Parvasi Bharti Award 2022” for carving a niche in crop diversification.

Another farmer felicitated was Amritpal Singh Randhawa of Fuglana village in Hoshiarpur district. He has also taken great strides in crop diversification. After pursuing his MSc (Horticulture) from PAU, he set up a processing plant in which he processed raw turmeric into powder and a cold store (1,800 metric tonnes) for the storage of raw and ripened potatoes.

On his 54 acres land, he cultivates pear, peach and plum (on 16 acres) as well as spring maize and moong. For irrigation, he uses a solar pump. He is also cultivates turmeric for which he uses vermi-compost, green manure, farm yard manure, neem oil and organic substances.

Satnam Singh of Burj Tharoar village in Bathinda district was conferred “Surjit Singh Dhillon Award 2022” for scaling heights in agriculture as a small farmer. He practices scientific farming on four-and-half acres, of which he owns two-and-half acres and has taken two acres on lease.

As compared to the traditional wheat-paddy cycle, he has earned more profits from vegetable nurseries, for which he got training from Krishi Vigyan Kendra (KVK), Bathinda. He has adopted sprinkler irrigation for water conservation and in-situ crop residue management technologies for soil health enhancement, besides managing weed manually and following PAU recommendations for judicious use of agro-chemicals.

He was into self-marketing of vegetable saplings and emerged as a role model in the cultivation of fruits and vegetables and dairy farming.

Manjit Singh of Karanghana village in Mansa district was honoured with “Sardar Ujaggar Singh Dhaliwal Memorial Award 2022” for excellence in vegetable cultivation. After doing senior secondary, he joined his ancestral profession of agriculture. Not satisfied with the wheat-paddy monoculture, he started vegetable nursery after getting training from KVK, Mansa. Presently, 38-year-old Manjit Singh has a vegetable nursery on five acres and grow saplings of paddy and kharif onion. He has motivated 10 youths of his village, who help him in onion cultivation and have also set up an onion storage facility.

A woman farmer Veerpal Kaur of Romana Albail Singh village in Faridkot was also among those honoured at kisan mela. She was awarded “State Awardee Sardarni Jagbir Kaur Memorial Award 2022” for earning recognition in allied agri-occupations. A 46-year- old postgraduate in Punjabi, Veerpal Kaur cultivates different crops on a three-acre farm in addition to dairy and poultry farming. She was into preservation of fruits and vegetables as well as bakery and confectionery and was a recipient of Progressive Farm Woman Award from KVK, Faridkot, in March 2022. She holds exhibition at institutions.