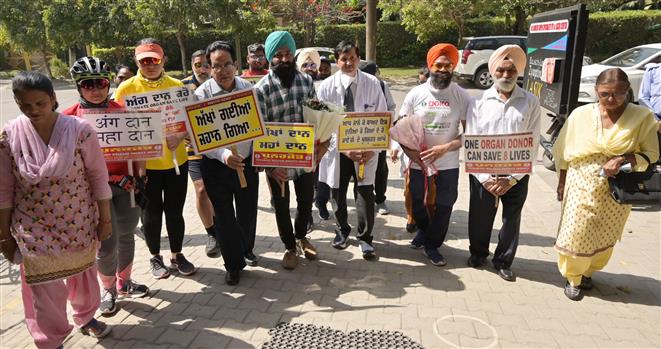 The tour was dedicated to physical fitness and organ and eye donation. A function was organised by Punarjot Eye Bank Society to honour the cyclists who pedalled from Ludhiana to Nepal. Subhash Malik from the society said under the leadership of Dr Ramesh, the society wants to create a world free of corneal blindness.

“While we urge people to donate eyes and organs, we also tell them to send corneal blindness patients to us,” he said.

The society has so far performed about 5,700 free corneal transplants. Onkar Singh Pahwa, CMD, Avon Cycle, who was the chief guest, spread the message of physical fitness and organ donation.

Jaswant Zafar, the guest of honour, said though he was saddened by the untimely death of his young son in Canada, his organ donation would help in spreading the mission worldwide. Receiving the award, Jatinder Singh Indico and his friend Jatinder Singh said they were emotionally attached to the mission and would continue to do so in future. He said the society had received a lot of support from doctors and eminent citizens of Ambala, Muzaffarnagar, Bareilly and cities of Nepal. The cyclists and members of the Bicycle Club, Ludhiana, assured that they would promote organ donation across the state soon. —