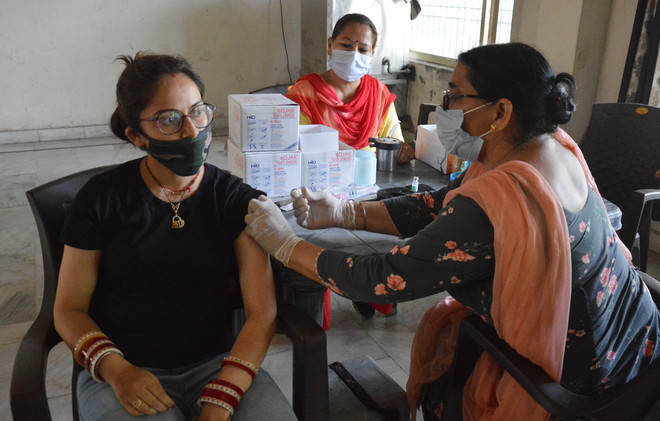 A woman gets vaccinated against Covid in Ludhiana on Thursday. Photo: Inderjeet Verma

Having made a remarkable turnaround from worst-hit to the safest district in Punjab, Ludhiana has recorded its lowest-ever daily Covid positivity rate, a key indicator of virus surge.

At the record low of 0.39 per cent on Wednesday when only 43 of the total 10,898 samples taken during the past 24 hours tested positive, Ludhiana’s hit rate continues to be the lowest in the state.

However, the district’s 24-hour positivity rate rose to 0.6 per cent on Thursday when 64 of the total 10,645 samples tested positive here.

The data compiled by the Health and Family Welfare Department, which is available with The Tribune, revealed that Ludhiana’s daily positivity rate was almost 1 per cent less than the state’s average of 1.33 per cent on Wednesday.

On Thursday also, Ludhiana’s hit rate remained lowest in the state and was half than the state’s average positivity rate of 1.28 per cent.

Retaining the tag of safest district and constantly recording the lowest hit rate in the state for the past one week, Ludhiana’s positivity rate continuously remained below 1 per cent since June 12.

The data compiled by the district Health Department since August last showed that the daily positivity rate had never plummeted below 0.73 per cent, which was the previous lowest recorded in the district on October 19, 2020.

This U-turn assumed much significance as the daily positivity rate has dropped by a whopping 19.18 per cent from the highest-ever ratio of 19.57 per cent in 45 days. The district had touched its peak of virus surge on May 2.

The official data suggested that the daily hit rate has been plummeting constantly since the last week of May.