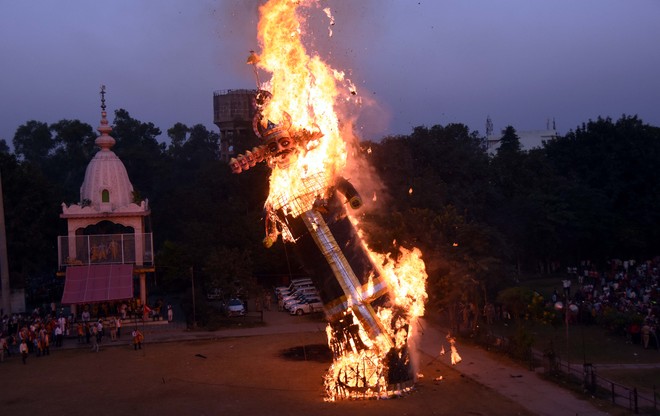 An effigy of Ravana being burnt at the Daresi Dasehra ground in Ludhiana on Friday. Tribune photo: Himanshu Mahajan

Dasehra was celebrated with religious fervour in the city. At many places, including Daresi Ground, Agar Nagar, Rajgarh Estate, near Durga Mata Temple, Vardhman Road, Krishna Mandir, the festival was celebrated and enjoyed by huge crowds.

Covid-19 guidelines were not followed as a majority of residents were seen roaming in the mela without mask, enjoying food at open stalls. Dasehra, also known as Vijaydashmi, is a Hindu festival that marks the victory of good over evil. The day is celebrated with the hope that we kill all the evils inside us and around us to make this world a better place to live in.

This time, a 100-feet Ravana effigy was prepared by artists along with effigies of Meghnad and Kumbhakarna at Daresi. The festival was not celebrated with much pomp and show last year due to the Covid scare but this time, Ali Asgar from Agra had come to prepare the effigies. The artist has been coming to the city for about three decades to make the effigies of Ravana, Meghnad and Kumbhakarna. Meanwhile, in many households, puja was performed in the morning. Most of the shops were shut at around 5 pm in all markets as Ravana effigies were to be burnt at different places from 6 pm onwards. Police personnel were deployed at places where Dasehra fairs were held to avoid any untoward incident.