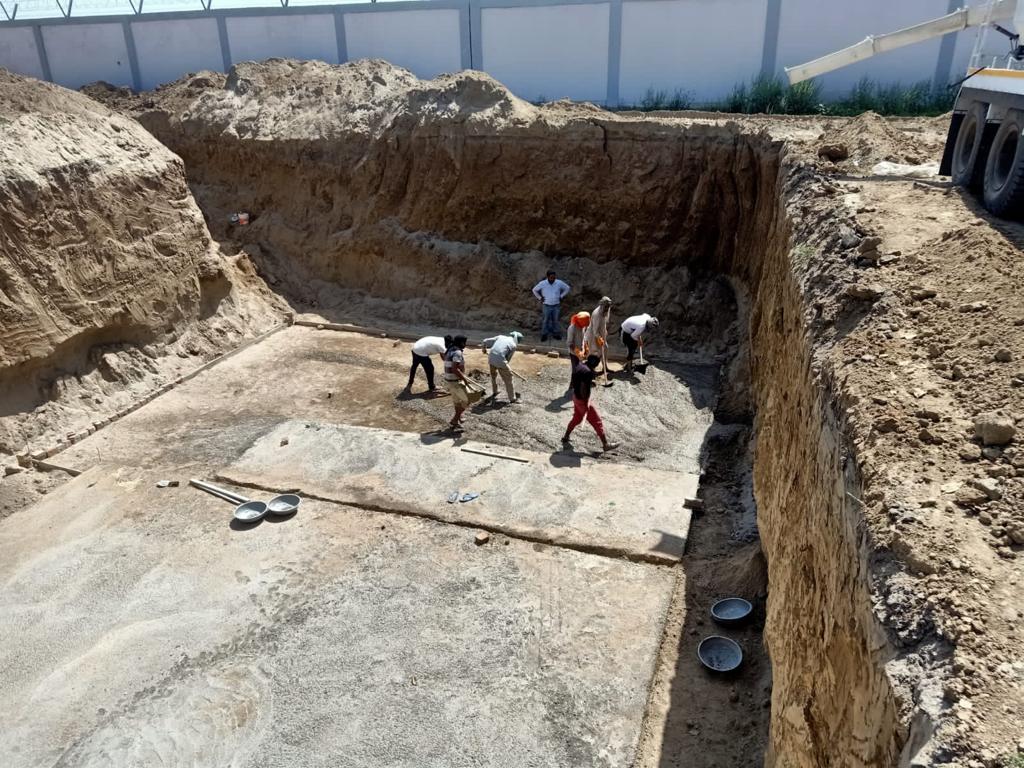 Work in progress on the interim terminal building at the upcoming international airport in Halwara, near Ludhiana, on Sunday.

As the extended deadline is just a month away, the ongoing work to construct the interim terminal building of an upcoming international airport has been expedited at Halwara here, the administration has confirmed.

The work on the new international airport has been expedited and will be completed within the stipulated timeframe to begin the operations at the earliest. Besides improving the air connectivity of the industrial capital of the state, the new airport will give a major boost to the economic development of Ludhiana and help attract more investment and jobs for the city Surabhi Malik, DC

The work to construct the interim terminal was allotted to a Himachal Pradesh-based construction company at Rs 2,272.5 lakh in December last year and the allied works were allotted to a Ludhiana firm at Rs 1,604.15 lakh in November last year, officials have said. The foundation stone of the project was laid by Fatehgarh Sahib MP Amar Singh on January 5.

Deputy Commissioner Surabhi Malik told The Tribune, here, on Sunday, that the work to construct the interim airport terminal building and internal roads had been expedited with most of the allied works either completed or nearing completion for the big ticket project.

She said the pre-construction activities had already been completed long ago and the allied works, including the road network, have progressed fast in the advanced stage of completion to meet the deadline for the Rs 38.77 crore project.

The work on the new terminal building, public conveniences, guard rooms, sub-stations, electrical works, new link taxiway from IAF wall to apron, connecting road from terminal to apron, city side and approach road from boundary wall to terminal building was in an advanced stage of completion and the private agencies concerned have been directed to further expedite the ongoing work.

Synergy Thrislington of Solan was awarded the work to construct the interim terminal building of the new international airport on December 9 after being found to be the lowest and the most suitable bidder among the five eligible bidders.

The firm was given six months to complete the allotted work.

Divulging the progress of the ongoing work, Greater Ludhiana Area Development Authority (GLADA) Additional Chief Administrator Shikha Bhagat said after completion of prerequisite tests and pre-construction activities such as survey and sub-soil investigation, the embankment and subgrade top layers had also been completed on most of the internal roads with a width ranging from 5, 7 to 10-meter carriageway.

She said a ready mix concrete plant had been established at the project site to undertake the construction of structural works.

Confirming that all prerequisite tests and pre-construction activities such as survey and sub-soil investigation had been completed, PWD (B&R) Executive Engineer Adesh Gupta said structural and architecture drawings had been approved after vetting by the NIT in Jalandhar while samples of construction material had also been cleared by Thapar Institute in Patiala for concrete mixture design.

The construction material has already been dumped at the site for undertaking work on substations, public conveniences and underground tanks.

The interim airport terminal will be built on engineering, procurement and construction (EPC) mode on a lump-sum basis at Halwara air base.

The allied works were allotted to Ludhiana-based Ceigall India Limited on November 8 at Rs 1,604.15 lakh on the EPC mode with a six-month completion deadline.

The project entails building an interim arrangement to attend immediate requirements to make international flights available to residents of Ludhiana, which was the state’s largest industrial city.

The interim terminal building will be a prefabricated steel structure with a modern outlook, spread over a 2,000-square km area with 3,800-square meter canopy space having a seating capacity of 300 passengers.

The PWD (B&R) was the main executing agency while a private firm was hired for architectural design of the project.

The scope of the project includes a new terminal building along with ancillary facilities such as apron taxiway extensions, sub-station, boundary wall and approach road.

The terminal will be a state-of-the-art building as per norms and requirements of the AAI while construction of the apron will be suitable to park one AB321-200 type aircraft and widening of the taxi track and car park will accommodate 75 cars.

The common concourse area will have provision for snack bar, toilets, AC switch room, drinking water, separate toilets for men and women, first-aid room, supporting office for AAI and airlines. The check-in area will comprise four check-in counters, adequate queuing space, and baggage conveyor belt with storing space for 50 baggage trolleys. Besides the flight information display system with adequate number of display devices in departure, arrival and security hold area for passenger facilitation, X-Ray machines for scanning baggage will be installed as per the AAI norms.

After missing the January 2022 deadline earlier set by the state government to make the new airport operational following much delay in granting the final approval from the Airports Authority of India (AAI), the PWD (B&R) had floated two separate tenders for the construction of the airport project. It was on October 22 that the AAI had accorded formal nod to the construction of a new interim terminal building for the upcoming international airport at the cost of Rs 4,691.12-lakh following which the Punjab Civil Aviation Secretary had issued the administrative approval for release of Rs 4,290.42 lakh through GLADA.

In a bid to give a boost to the industrial and economic activity in the state, the state government and the AAI were jointly setting up a new international civil terminal at the Air Force Station in Halwara, which is one of the oldest frontline airbases of the Indian Air Force, close to Ludhiana.

Ludhiana, which is Punjab’s largest industrial and business city with a population of nearly 4 million, was at present serviced by a small domestic airport at Sahnewal, which will be shut once the new international airport begins operations. Ludhiana also has the advantage of being at the geographical centre of Punjab.

Before the construction of a regular terminal, an interim building will come up to begin the airport operations here. Land measuring 161.28 acres, comprising 135.54 acres for airport and 25.74 acres for future development, had already been acquired.