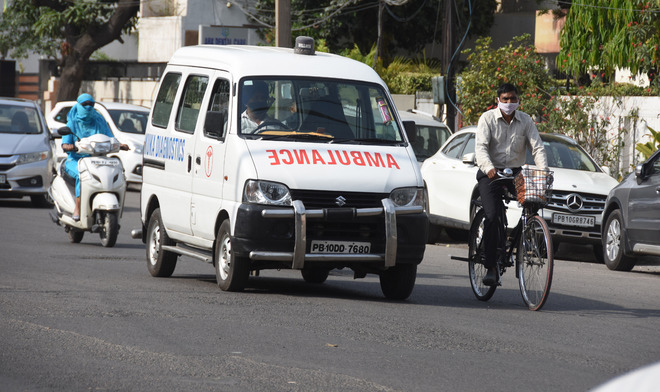 District is witnessing a surge in the Covid cases and a steep rise in the demand of the ambulance service has been seen. Instead of cutting down the charges amidst the pandemic, these private operators are busy making some quick bucks out of the miserable condition of the people and charging exorbitantly high for shifting patients to hospitals or bodies to the crematoriums.

On Monday, the families of two Covid victims were unable to arrange an ambulance and left with no other option they took the bodies to the crematorium in an auto-rickshaws and a hand-pulled cart. Ambulances were asking for Rs3,000-4,000 for taking bodies to crematorium.

After this, on Wednesday, the district administration constituted a special cell to ensure proper transportation of bodies and cremation and also fixed the prices per kilometre for the private ambulances but not giving two hoots to the price cap, these operators are busy minting money from the people who are already passing through a tough time.

Today when The Tribune correspondent posed as a family member of a patient approached an ambulance operator outside a private hospital at Model Town to enquire about shifting of Covid positive patient from Mullanpur to a city hospital, she was told different prices according to the requirement.

For shifting the patient from Mullanpur, the operator asked for Rs3,200. “Although a few provide ventilator but we can arrange that and it will cost Rs5,000 in an ambulance with a ventilator for shifting patient to the hospital,” he said.

He said if the bed in the hospital had been booked then it would cost Rs5,000 but Rs4,000 extra would be charged for going from one hospital to another in search of a bed.

Another private ambulance operator near the DMCH demanded Rs4,000 for shifting patient from Mullanpur in an oxygen cylinder-fitted ambulance. He cautioned me to bring the patient only when I have prior booking of the bed in the hospital, otherwise going from one hospital to another will cost a heavy sum.

Another ambulance operator was enquired about shifting the patient within the city and he quoted Rs2,500 for the same. When asked why he was charging so heavily he said they have added the cost of PPE kit and oxygen cylinder also. “Oxygen cylinders are available at inflated rates and we have to charge for that also,” he said.

Judgepreet Singh, manager of the Samvedna NGO, said their five ambulances were on round-the-clock duty and they were not charging a single penny from the families. “Due to increase in number of deaths, we are only moving bodies to the crematoriums so that they get a respectable farewell,” he said.

There are fortyone 108 Ambulances in Ludhiana and on an average they are ferrying 150-170 patients/bodies daily.