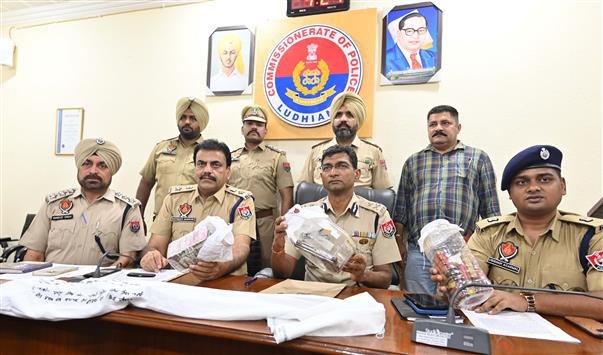 With the arrest of four persons, the Ludhiana Commissionerate solved a major bank robbery occurred at the Punjab National Bank (PNB) branch in Detwal village within 48 hours. Kuldeep, who is working as a peon at the bank, turned out to be the main conspirator in the case.

Despite a high alert in the state, the miscreants had looted Rs 7.44 lakh from the PNB branch in Detwal village on Thursday afternoon. The rural police were on their toes after the incident.

The loot incident had occurred in the jurisdiction of the Ludhiana rural police and a case was registered at the Mullanpur police station. However, the Ludhiana Commissionerate police succeeded in solving the case.

Kuldeep, the peon at the bank, is the brother of a murder convict who had killed DSP Balraj Singh Gill and Monica Kapila at a farmhouse on Hambran Road, here, in 2012. Six accused were convicted in the murder case.

Commissioner of Police (CP) Kaustubh Sharma, JCP (City) Narinder Bhargav, along with other officials, conducted a press meet in this regard.

The CP said the peon, Kuldeep, was already present at the bank when robbers reached the place and took everyone at gunpoint. He had guided his accomplices about the exact timing when cash would be available in the cashier’s cabin. The robbers had entered the bank as per the timing given by the peon.

Sharma said a tip-off was received that the accused who committed a bank robbery at Detwal village were present at a cremation ground in the city and they were planning to commit a dacoity in another bank now. Accordingly, a team conducted a raid and nabbed the accused. One of the accused managed to give a slip to the police.