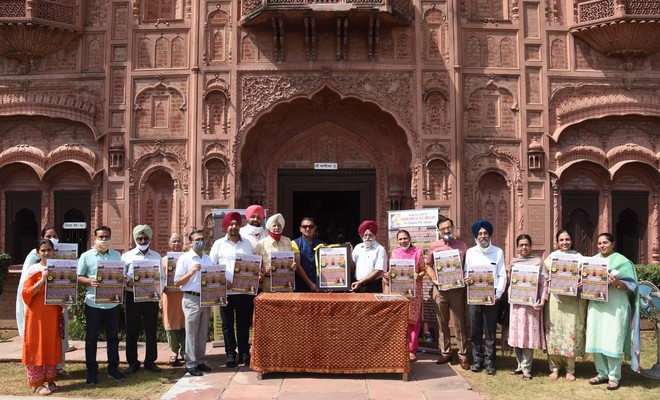 The worldwide premiere of a short documentary film titled “Museum of Social History of Rural Punjab” was launched at Punjab Agricultural University (PAU) by Dr Baldev Singh Dhillon, Vice-Chancellor, as a part of World Tourism Day (September 27). The film, which depicts the unique museum of PAU, has been directed by Harpreet Sandhu, Punjab High Court Lawyer and a keen nature and heritage photographer, in collaboration with PAU. A special banner stating, “Don’t let this rot, it showcases our life” was also released on the occasion.

The event was jointly organised by the College of Community Science and Communication Centre, PAU, under the guidance of Dr Sandeep Bains, Dean of the College and Dr TS Riar, Additional Director Communication.

Dr Dhillon lauded the efforts of Sandhu in directing this documentary. He paid rich tributes to Dr MS Randhawa, former Vice-Chancellor, PAU, who was the brain behind this museum. Dr Dhillon said: “Green Revolution was ushered in Punjab due to collective efforts of farmers of the state and scientists of PAU followed by supportive policies. But declining natural resources in present day agriculture is a matter of concern. There is a need to conserve natural resources.” In the same way, there is a need to preserve virsa (heritage) of Punjab, he stressed. Dr Dhillon called upon the urban residents to stay connected with the roots of Punjabi culture.

Sandhu said: “I have made this documentary to promote this unique monument which offers a peep into rural life of Punjab from bygone era and leaves one with nostalgic feeling of the glorious past.” “Preserved for the past more than four decades by PAU, the museum has a cultural, linguistic and social affinity. Punjab should be proud of having such a museum which displays a large number of handicrafts, household implements, traditional musical instruments, clothes and jewellery as well as mannequins enacting scenes from daily life,” he said. The film will be a rich feast for the eyes of the Indian diaspora, he added.

Sandhu further said that prior to this, he has directed four documentaries during the lockdown, which include “Balihari kudrat vasya – Almighty prevails in nature,” “Moorish Mosque” (based on Punjab tourism site in Kapurthala), “Pul Kanjri – A forgotten historic site in Amritsar” and “Prayer for Protection” (based on historic Gurdwara Bhabour Sahib in Nangal, Punjab). He also expressed his gratitude to Dr Dhillon, Vice-Chancellor, PAU, and other senior officials of the University.

Dr Surabhi Mahajan, Assistant Professor, Department of Apparel and Textile Science, PAU, welcomed the dignitaries, senior officials and faculty of PAU. Later, she proposed a vote of thanks.