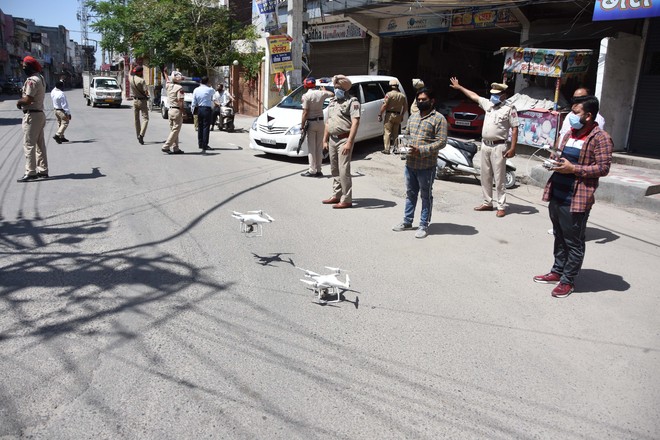 Policemen use drones to keep tabs on curfew violators in Ludhiana on Saturday. Tribune Photo

Despite the Ludhiana police claiming round-the-clock patrolling and vigil against curfew violations, residents continue to throw norms to the wind.

Today, DCP Akhil Chaudhary carried out drone surveillance in various locations. The police have been provided with 15 drone cameras.

Jaspreet Singh, in response to the police post on the social media, says: “Ishar Nagar area behind GNE College needs patrolling at least once a day so that people stay home. They just want to do gossips without any fear or social distancing”.

Manish Nayyar says people sit outside their houses all day in Salem Tabri, New Aman Nagar. He requests the deployment of one officer or a security person in the area.

Bhanu Singh says in Gurbagh Colony, Jeewan Nagar, people are seen roaming around all the time. In the evening, while boys play outdoor games, women sit together for gossiping.

“The worst condition of curfew violation is on ATI Road stretch from Arora Palace to Waheguru Road and even at Daba Colony. You can see people standing on street corners, specially youngsters gossiping with each other. Some play cricket. People are sitting in groups on streets all day,” comments Amandeep Verma.