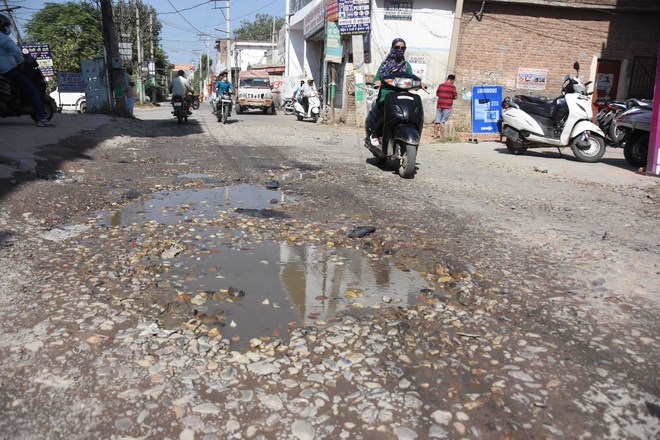 Damaged Dugri-Dhandra Road, near the Dugri police station, has been crying for attention for long. Area residents have been demanding that the government should get the road reconstructed at the earliest, but to no avail.

A group of residents said the Municipal Corporation (MC) had carried out some sewer related work on the stretch a few years ago. However, the damaged road portion was not reconstructed till date leaving the commuters inconvenienced.

The situation worsened on 200-metre stretch near LIG flats, Dugri, during the last rainy season, but the department concerned has yet to awake from stupor. Thousands of commuters pass through this stretch in routine.

A resident of LIG flats, Sanjeev Gupta said they had been demanding from the civic body authorities to get the road reconstructed at the earliest. “We have met MC officials and Mayor Balkar Singh Sandhu in this regard. The road has not been reconstructed for years altogether. We have learnt that this broken stretch falls under the MC Zone C. We appeal to the authorities to hear our voice and reconstruct road at the earliest,” he added.

Loose gravel on the stretch is an open invitation to mishaps. Residents said many mishaps had taken place on the damaged stretch. Earlier, some residents had written to the state government about the poor condition of the stretch, but to no avail.

Despite repeated attempts, the Zonal Commissioner, Zone C, Neeraj Jain, could not be contacted for his comments on the issue. Mayor Balkar Singh Sandhu said the stretch was not under the jurisdiction of the Ludhiana MC. However, Sandhu added, “We will take required steps to get the stretch carpeted so that commuters don’t face any inconvenience.”