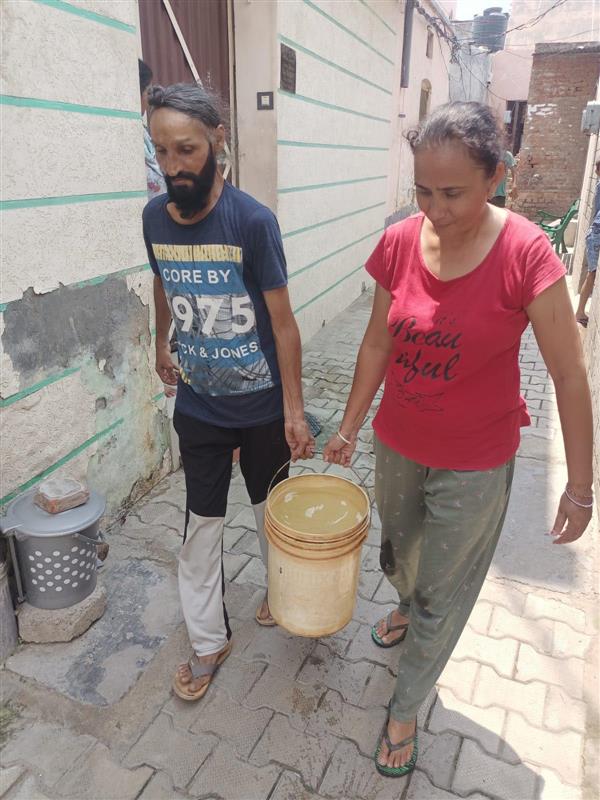 Residents of Dugri fetch water from a gurdwara in Ludhiana.

Amidst much clamour of ‘Azadi Ka Amrit Mahotsav’, thousands of residents of the Dugri area, falling under Ward No. 43, are struggling for drinking water. Councillor, officials of the Municipal Corporation and elected representatives have turned a blind eye to the plight of residents.

With the tubewell motor getting burnt, the water supply in the area has been disrupted for the past 2-3 days (second time during this week). With no supply of piped water, residents were forced to fetch water from a nearby gurdwara or a submersible pump installed in the vicinity of Dugri village.

Satnam Singh, a resident of the affected area, said: “Contractors engaged by the Municipal Corporation for the maintenance of tubewells do not give two hoots to the misery of people who have to go without water supply for days together.”

Residents Sarbjit Kaur and Hardeep Kaur said the elected representative of the people keep making tall claims about providing basic amenities to the people but people in the industrial and financial capital of the state were being denied basic necessities.

Councillor Reet Kaur said one or two tubewell s supplying water to Dugri and surrounding areas had gone faulty and the contractor responsible for maintenance had been asked to get the motor repaired immediately and restore water supply.

Municipal Corporation Junior Engineer (O and M) of the affected area Kuldeep said he was in touch with the contractor and repair of the burnt motor was underway. Hopefully, the water supply to the area would be restored very soon, he said.

Municipal Corporation Superintending Engineer (O and M) Ravinder Garg said every possible effort was being made to restore water supply to the area. “Field staff of the civic body has been asked to investigate the delay in repair of the faulty motor and if the contractor was found to be at fault, stern action as per terms and conditions of work order (agreement) be taken against him,” he added.