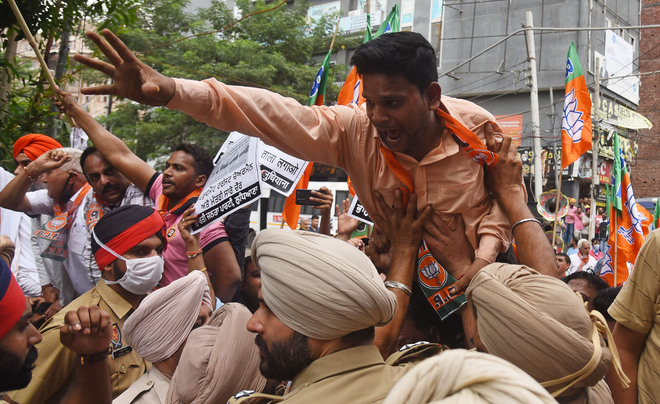 BJP workers, protesting against LIT e-auction, clash with the police in Ludhiana on Thursday. Himanshu Mahajan

High drama was witnessed outside the Ludhiana Improvement Trust (LIT) office in Feroze Gandhi Market here today when protesting workers and leaders of BJP forced their way through two barricades put up by the police and locked the main gate of the Trust office. The BJP activists were protesting against the sale of prime land in Model Town Extension by LIT through e-auction at very low rates in comparison to prevailing market price of commercial land in that area.

Addressing the protesting workers and party activists, district president of the party, Pushpinder Singhal, said the lock on the LIT office was a symbolic gesture to tell the city residents that the LIT no longer served their interests and under political pressure government properties and land were being given on a platter to land mafia.

Singhal and other party leaders said the protest would continue till the auction of land conducted on August 16 was cancelled and FIR was lodged against LIT Chairman Raman Balasubramaniam and his patron Cabinet Minister Bharat Bhushan Ashu. He said when public land

and properties were being looted by those in power, the party could not remain a silent spectator.

Bikram Singh Sidhu, state executive member of the party, who had held a protest and burnt effigies of Trust chairman and Cabinet Minister Ashu on Wednesday here, demanded that all sales, auctions and allotments of residential plots, commercial and institutional sites and built-up commercial properties conducted during the regime of the incumbent chairman be probed by an independent agency.

“At the same time, an enquiry should also be conducted into the financial transactions of the main beneficiaries of the present Congress regime and nexus of realtors and political leaders which was out to usurp government land/properties,” added the BJP leader.