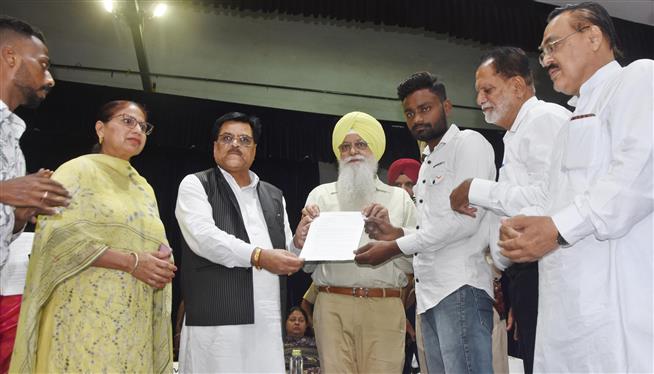 Giving a big gift to Ludhiana Municipal Corporation (MC) staff before Diwali, the state government regularised the services of 3,542 contractual safai sewaks and sewermen of the MC. Local Bodies Minister Dr Inderbir Singh Nijjar handed over appointment letters to around 150 safai karamcharis and sewermen at Guru Nanak Dev Bhawan on Tuesday. The employees were on cloud nine as their long pending demand has been fulfilled by the government. The appointment letters are to be distributed among remaining employees in a phased manner in the coming days, AAP MLAs said.

Now, I will get Rs 18,000 salary per month. My parents, wife and three children are extremely happy today after I got the appointment letter.— Sundar Kumar

A large number of safai sewaks and sewermen along with family members had gathered outside Guru Nanak Dev Bhawan also. Several were seen dancing in joy on the beats of dhol outside the venue after getting the appointment letters.

After getting the appointment letter from the minister, Sundar Kumar, a safai sewak, said his job has been regularised after nine years of service. Kumar said, “I was getting around Rs 8,600 monthly salary on a contract basis and it was difficult to run the house with such a low income. Now, I will get Rs 18,000 salary per month. My parents, wife and three children are extremely happy today after I got the appointment letter for regular job.”

A sewerman, Ravi said he had been working since 2009 on contractual basis. After a wait of around 13 years, his job has been regularised today. “This day is full of joy for me and my family as I am a regular employee of MC now,” said Ravi.

A woman safai sewak, Jyoti, said, “I had been working on a contract basis for the past nine years and my job has been regularised today.”

Addressing a gathering at the function, Dr Inderbir Singh Nijjar said the process of regularising services of 456 beldaars, drivers and other employees working on DC rate in the MC, Ludhiana, has also been initiated.

He said there was an anomaly in the earlier resolution passed by the MC, which was the main hurdle in regularising the services of safai sewaks and sewermen. He added that in the coming days, services of remaining safai sewaks/sewermen would also be regularised.