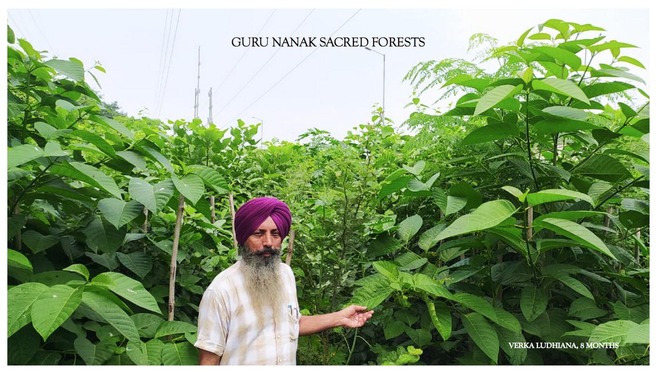 The Guru Nanak Sacred Forests, the number of which is now close to 100 in Punjab, are helping in rapid afforestation across the state.

The industrial hub of Ludhiana that has had the unenviable distinction of being among the most polluted cities of the state has a reason to cheer as it (Ludhiana district) has topped the number of sacred forests that have been grown successfully.

The salient features of the forests, popularised in the country by EcoSikh, are that it is 30 times denser and has 10 times more growth rate. It is 100 times more biodiverse and completely free from chemical fertilisers. It is also cost-effective and easy to maintain.

The methodology adopted for growing the sacred forests is the Miyawaki rapid afforestation technique pioneered by Japanese botanist Akira Miyawaki.

The procedure for developing the sacred forests is simple. A fenced plot suitable for plantation with underground and overhead clearance is selected. The soil is tested for its capacity of water retention, perforation and organic content. Required biomass is chosen and mixed to stabilise all above parameters. Thus, the forest bed is carefully prepared. The land is levelled. Indigenous plants native to the region are precisely quantified and procured. They are distributed and planted following a layered structure according to the Miyawaki method.

The entire forest is provided a support system, security from animals, and additionally the forest bed is heavily mulched which helps to regulate soil temperature and survival of micro-organisms and small creatures in the soil.

Experts associated with eco-forests claim that every land can be turned into a forest. As Ravneet Singh says: “Like human beings, trees also show a remarkable resilience which we noticed when the forest cultivated at a low-lying industrial area in Ludhiana survived despite waterlogging and heavy contamination with oil spills. Though we were apprehensive that the major chunk of the forest would be lost, it came as a huge surprise that 80 per cent of the forest trees survived!”