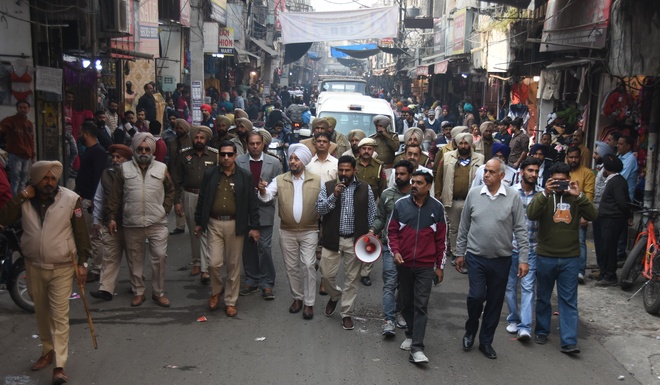 The traffic police and MC staff carry out an anti-encroachment drive in the old city area of Ludhiana on Saturday. Himanshu Mahajan

With the motive to solve the traffic congestion in the old city areas, the traffic police along with the Municipal Corporation staff carried out an anti-encroachment drive.

The ADCP, Traffic, Sandeep Sharma, led the drive along with the large number of traffic policemen.

The police removed the roadside vendors who had resorted to encroachments on the road. Even the encroachments by shopkeepers outside their shops were removed. Due to this encroachments, roads in the old city areas has turned narrow and cause huge traffic jams.

Shopkeepers had also praised the drive as the encroachments by roadside vendors outside the shops caused traffic congestion on the road due to which customers hesitate to enter the old city markets and their businesses suffer.

“We have today not challaned or taken any legal action against the encroachers. Today’s drive was mainly an awareness drive but in the coming days, if any violation takes place, the police will take action as per the law,” said the ADCP, Traffic.

Meanwhile, some shopkeepers said some corrupt police officials themselves allow roadside vendors to install vends outside the shops and in return they take bribe from the vendors. On this, ADCP Sharma said he would check if anything of this sort is happening.