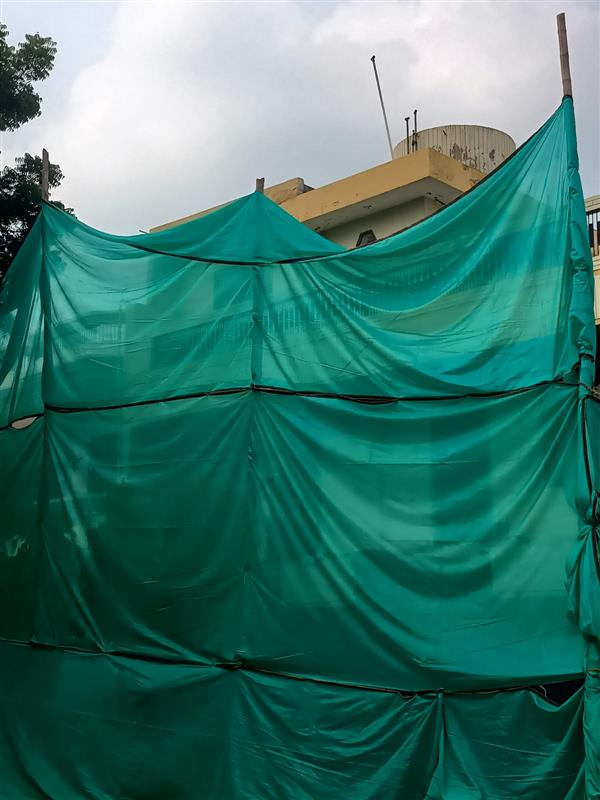 The front portion of an under construction illegal commercial building covered with a cloth screen at Dugri in Ludhiana. File

Expressing its anguish over mushrooming of illegal colonies all around the periphery of the mega city, unchecked construction of commercial buildings and other blatant violations of building bylaws in most GLADA colonies or areas under its jurisdiction, the Council of Engineers (CoE) has called upon Chief Minister Bhagwant Singh Mann to intervene and check the menace lest it should cause irreparable damage to

In a complaint to the CM, with copies to Chief Administrator, PUDA, the Secretary, Housing and Urban Development, and the Chief Administrator, GLADA (Greater Ludhiana Area Development Authority), Council of Engineers (COE) president Kapil Arora has pointed out that the regularisation policy introduced by the state government expired in March 2018, still large numbers of illegal colonies had come up in localities/areas under the jurisdiction of GLADA.

He said in most of these illegal colonies, area left for parks and green belts had been used for carving out residential plots or commercial pockets, which was a big threat to environment of the city.

Not only this, most developers as well as plot/property holders in such illegal colonies had violated building byelaws and in many cases there was illegal change of land use by setting up commercial buildings on residential properties, he added.

Holding GLADA officials squarely responsible for the rot, unregulated growth of colonies and spate of violations, the engineers’ body chief said besides turning most areas of the city into slums, total inaction on the part of GLADA was also causing serious damage to the environment.

Arora emphasised that since the matter was serious and posing threat to the city’s environment, it warranted a high-level probe and action as per rules against derelict officials and employees of GLADA.

He, however, added that if action was not taken in this regard within next 10 days, the CoE would be left with no choice other than to move the National Green Tribunal and seek other legal remedy for redressal of legitimate grievances of city residents.