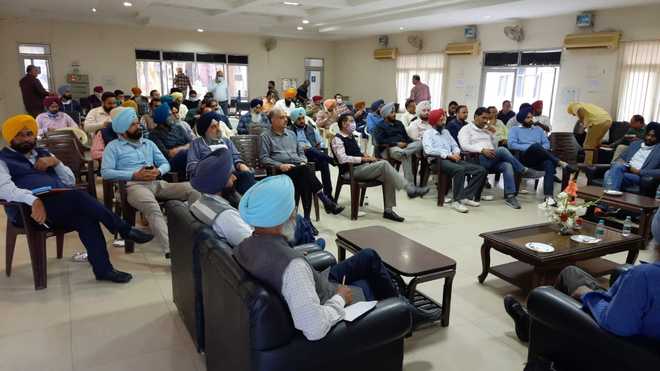 A meeting of the PSEB Engineers’ Association in progress at Ludhiana on Friday. Tribune photo

As many as 150 engineers participated in a zonal-level meeting of the PSEB Engineers’ Association here today.

The participants had gathered from Ludhiana, Khanna, Jagraon and Sahnewal. They criticised the PSPCL management and Punjab Government for “failing to protect the interest of citizens.”

Speakers, including Ajay Pal Singh Atwal, general secretary of the association, said the PSPCL had submitted a plan to hire only 2,632 employees but there were more than 20,000 vacancies in the power sector. They said 1,227 posts from the Punjab cadre were lying vacant in the Bhakra Beas Management Board, which was not only a financial loss but loss of employment opportunities.

Members appealed to Chief Minister Capt Amarinder Singh to intervene and protect the state power sector. They said if the PSPCL management failed to protect the interest of the power sector, the association would start a statewide agitation. — TNS