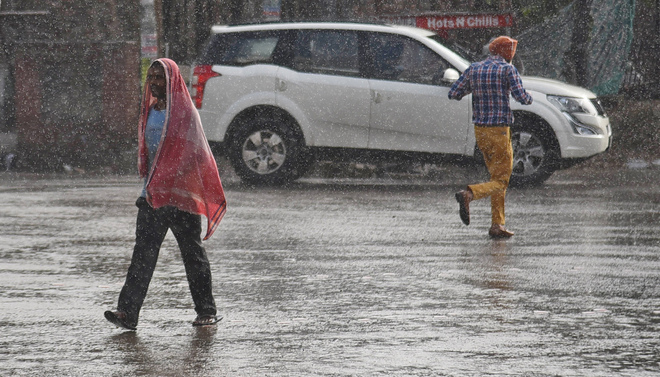 Continuous rainfall for the coming few days is expected in the district which will provide some relief to people from heat and high humidity.

Continuous rainfall for the coming few days is expected in the district which will provide some relief to people from heat and high humidity.

According to Agricultural Meteorology Department of Punjab Agricultural University (PAU), rainfall is expected for the coming three days which will plummet the temperature and make the weather pleasant. Orange alert has also been issued for a few districts but Ludhiana is safe and it will be receiving a moderate rainfall.

Dr Prabhjyot Kaur Sidhu, Principal Scientist, Agricultural Meteorology Department, PAU, said a system of rainfall had been formed and the state would receive continuous rainfall in the next few days. Some districts, including Hoshiarpur and Pathankot, would receive a heavy rainfall while Ludhiana would be receiving moderate rain.

The main reason for excessive increase in humidity is continuous increase in area under cultivation of paddy. Earlier, some parts of the state was under cultivation of paddy and on some belt, cotton crop was grown but now even the cotton belt has come under paddy. Water is stagnant in a large portion in the state due to which humidity levels have increased. Besides, before the system of the rainfall was formed, humidity levels increase. Humidity level will increase after rain also, but low temperature will some relief. “Rain at this point will prove beneficial for farmers as paddy needs a lot of water. Rain will help boost the growth of the crop. Waterlogging might take place in low-line areas, hence, farmers need to be prepared for the same and make arrangements. No spraying should be done in this period as it gets washed away by rain,” she said.

Meanwhile, people travelling to hills need to be careful these days as roads are slippery and there is low visibility in mountainous regions. They should travel only if it’s necessary and should check the forecast before starting their journey.