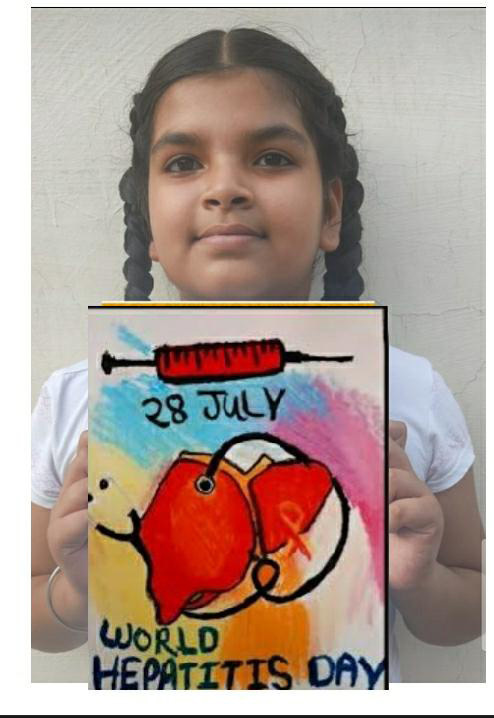 A Green Grove School student displays her poster on the occasion of World Hepatitis Day on Wednesday.

World Hepatitis Day was observed in various hospitals of the city today where awareness talks for the prevention of the disease were conducted.

The Health Department organised awareness events at the Civil Surgeon’s office and the Central jail today.

Civil Surgeon Kiran Gill said the treatment of hepatitis C and B was provided free of cost at district-level hospitals and free tests were also conducted.

She said 7,671 patients with hepatitis had come to get treatment in the district till June 2021 and of them, 5,067 patients had been successfully treated.

The Department of Microbiology, DMCH, organised a quiz competition on hepatitis for MBBS students (batch 2019), an awareness talk by infection control nurses for patients and attendants, among other events. HoD, microbiology department, Dr Veenu Gupta, said this day was celebrated to raise awareness about viral hepatitis which impacts over 354 million people.

“It is a group of infectious disease commonly caused by viral infection (Hepatitis A, B, C, D, E) in addition to other risk factors such as consumption of alcohol, toxins, some medications and certain medical conditions. It requires a multipronged approach for early case detection and appropriate treatment,” the doctor said.

Meanwhile, a blood donation camp was also held at the Department of Transfusion Medicine, DMCH.

To mark the day, ‘Team AGI-The Gastrociti’, Ludhiana, organised a public awareness session on causes, diagnosis and treatment of chronic viral hepatitis on the OPD campus. Gastroenterologist and chairman, AGI-The Gastrociti, Dr Nirmaljeet Singh Malhi, said according to WHO, 90 per cent of people living with viral hepatitis B & C were unaware of harbouring the infection resulting in the real possibility of developing fatal liver disease or liver cancer and at the same time transmitting the infection to others.

“With the availability of effective vaccines and treatments for hepatitis B and a cure for hepatitis C, the elimination of viral hepatitis is achievable”, he said.

Fortis Hospital, Ludhiana, also observed world Hepatitis Day. A free check-up camp was organised to mark the day. Doctors said that Hepatitis C was a viral infection of liver, which causes permanent liver damage (cirrhosis) and liver cancer ultimately leading to the death of patients. Dr Nitin Behl, additional director, gastroenterology and hepatology, claimed that “Punjab is the capital of Hepatitis C in India as the prevalence of the disease is around 6 per cent in the state.”

Dr Behl conveyed the urgency of efforts needed to eliminate hepatitis as a public health threat by 2030.

A Hepatitis screening and awareness camp was organised at Deepak Hospital, here today. Dr Dinesh Gupta, chief liver and gastro specialist at the hospital, said: “We are aiming to eliminate hepatitis C by 2030. This is possible by more screening and proactively finding out asymptomatic infections and treating it to break the transmission chain.”