Everything happened in no time: Injured workers 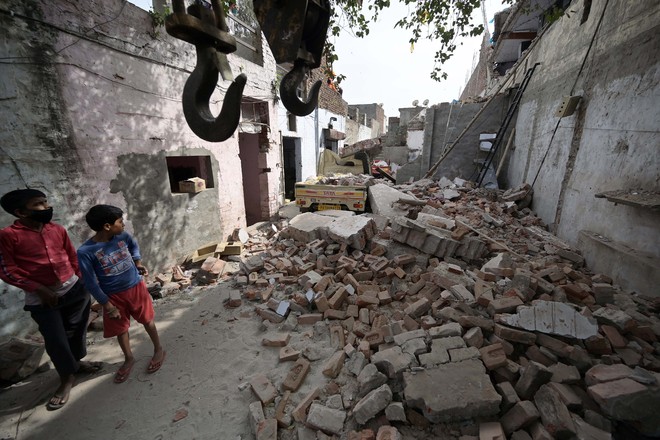 Four persons were killed and several injured as the roof of a building collapsed on Daba Road today.

“Out of the five injured workers, two have been admitted and their condition is stable, one sent home after first aid and two went to SPS Hospital on their own after getting first aid,” said SMO, Dr Amarjeet Kaur.

Abdulla (37) said everything happened within a fraction of a second after he heard a loud thud. “When I regained consciousness, I was in the hospital. There is a lot of pain in the body but what is more painful is that we lost two of the workers that I came to know while in the hospital,” he said.

Mohammad Rihan was taken to Civil Hospital and discharged after first aid. “I am too shocked to say anything. Nothing of this sort has ever happened in my life while working,” said the 25-year-old.

Four injured were taken to SPS Hospital, out of them one was brought dead. Medical Superintendent of SPS Hospital, Dr Rajiv Kundra said one injured died and condition of one was critical, while two were stable. “One injured had to undergo brain operation as there was a lot of bleeding in the brain. Operation was successful but the condition of the patient is still critical. Two other patients are stable and out of danger,” he said.

32-year-old Sagar Parmar, admitted to SPS Hospital, said he took first aid from Civil Hospital but later my family shifted me to SPS Hospital. “Everything happened in no time. I was taking care of the building material when suddenly the roof collapsed. I tried to run for cover but to no avail,” he said.