Mayor, other VVIPs advised to venture out with gunmen 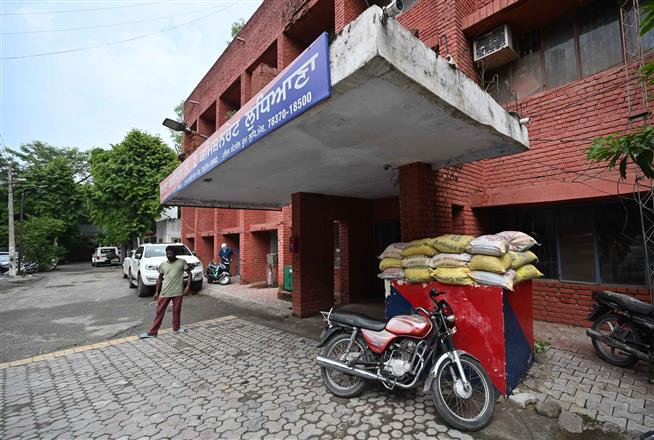 A bunker being set up at a police station in Ludhiana ahead of Independence Day. Ashwani Dhiman

Ahead of the Independence Day celebrations and reported alert by the Intelligence Bureau (IB) about the possible law and order situation in the state, the Ludhiana Police Commissionerate has alerted Mayor Balkar Singh Sandhu to stay alert and ensure the presence of all gunmen with him all the time.

Besides the Mayor, some other protectees, who have already been provided gunmen by the state police, have also been told to exercise maximum caution till August 15.

As per information gathered by The Tribune, ACP, Licencing and Security, Somnath, especially called the Ludhiana Mayor on Thursday and urged him to keep all his gunmen with him. The ACP also told the Mayor that he should avoid going out of his house at night and in the wee hours.

The Mayor was also asked to stay in the city and if he has any plans to visit any other place, he must take gunmen along or, if possible, he should avoid leaving the city for the next 10 days.

“If you have to attend any scheduled function, you should avoid reaching the venue on time, try to reach the venue little late to prevent any planned attack by anti-social elements,” the police told the Mayor.

Sources said the MC Mayor had six gunmen along with the official gypsy but he had not been keeping even one gunman with him for a long time due to his down-to-earth personality. He has not been keeping any gunman along and he has a habit of roaming alone in the city. Of the six, four gunmen, who are from the MC quota, has no weapon while two gunmen of the state police have AK 47 rifles.

Sources said security branch officials also visited Rishi Nagar where the Mayor uses to hold a chit-chat with local residents every morning and he was told to avoid this meeting till August 15.

Besides Mayor, there are only a few other protectees who are called and asked by senior police officials to keep their gunmen with them.