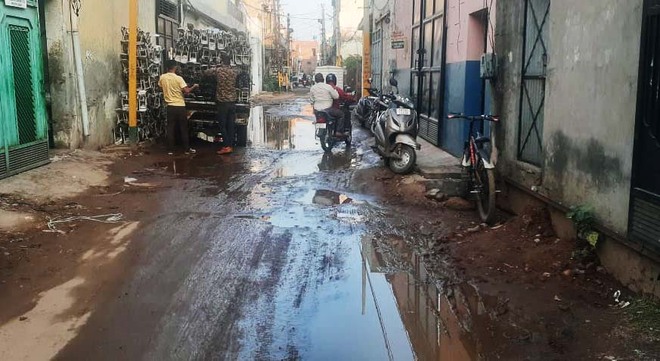 Residents are a harried lot as ‘untreated’ industrial waste was being dumped into the MC’s sewer line at street number 6 of Ranjeet Nagar in Ward Number 40 here. They alleged that the sewer line often remains choked and overflows due to the inflow of industrial waste.

The residents claimed that they have complained to the Punjab Pollution Control Board (PPCB) and also brought the matter to the notice of the MC Zonal Commissioner but to no avail.

Rajiv Kumar, a resident, said: “My house is located in street number 6, at the rear side of ATI College but it generally remains flooded with acid-mixed water. There are a number of factories in the street. The untreated waste from these factories is being dumped into the MC’s sewer line, which often overflows.”

“We are forced to live under poor conditions. I have sent a complaint to the Chief Environmental Engineer of the PPCB. Earlier, I had brought the matter to the notice of the MC Zonal Commissioner. The authorities concerned should take the matter seriously and initiate action,” he said.

Another resident, Parminder Singh, has also demanded from the MC and the PPCB to take action in this regard. The residents demanded that the authorities concerned should also conduct inspection of the factories.

Councillor Arjan Singh Cheema said they had deployed sewer men multiple times to clean the sewer line. If the factories did not stop releasing silt into the sewer line, I will also make a complaint to the PPCB,” he said.

No action despite complaints

Residents claimed that they have complained to the Punjab Pollution Control Board (PPCB) and also brought the matter to the notice of the MC Zonal Commissioner but to no avail.