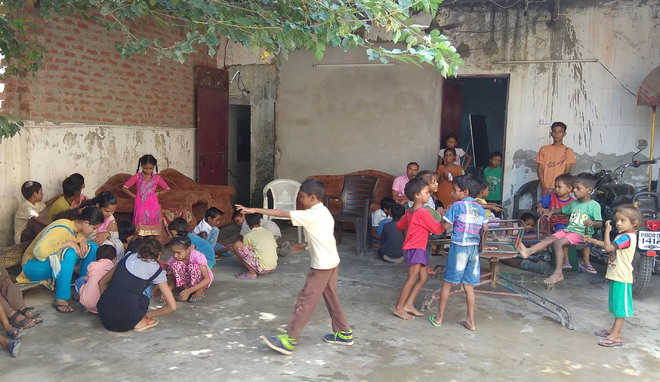 In an effort to protect vulnerable girl children, the Ludhiana Commissionerate Police are taking care of the unattended kids of factory workers in the industrial city.

Twentysix minor children, aged between four and 13, have been enrolled in the “Vehra Dhiyaan Da”, a first-of-its-type project in this part of the region.

On the completion of one month of the first crèche opened in Moti Nagar here last month, cops on Saturday celebrated Republic Day and Lohri with the toddlers, most of whom are girls.

The brainchild of Commissioner of Police (CP), Rakesh Agrawal, the daycare facility provides food, shelter, education, health, sports and other allied facilities, besides involving the inmates in extra-curricular activities to help them develop their physical and mental health in a safe and secure environment.

After the successful establishment and running of the first facility, the Commissionerate Police have decided to open at least four more such centres in different parts of the city in the days to come.

“Ludhiana being an industrial city has a huge population of factory workers. The pressure for meeting the basic needs like food and shelter forces such labour class to leave their young ones back home. These children, especially the girls, are vulnerable to crimes like molestation and sexual assault,” the Ludhiana police chief told The Tribune, while sharing the concept behind the novel project.

ADCP, Investigation, Rupinder Kaur Bhatti, who supervises the project on a daily basis and mingled with the underprivileged children during today’s celebrations, said that an NGO, “Do Good”, has adopted the centre to bear its financial burden and expose the inmates to various extra-curricular activities.

Three local women have been employed as attendants at the centre at monthly salaries ranging between Rs 6,000 and Rs7,000 each. The crèche opens at 8 am and closes at 6 pm after all the inmates are duly handed back to their parents on their return from jobs.

“This facility was opened at a dharamshala, which was lying defunct for long. Not only it helped use the space for a good cause but prevented petty criminals from misusing the place,” said the ADCP.

The police have also roped in the Health Department, anganwari workers, volunteers and the district programme officer to impart various trainings, education and social upbringing of the inmates.

The project aims at creating safe environment for the children of working parents. The NGOs adopt the Vehras in the areas where most number of cases of POCSO have been reported in the past, to the extent of paying monthly salary to the caretaker women, who take care of her own and other children in the crèche. The caretaker women are trained to engage the inmates positively in various activities. NGO volunteers remain in constant touch with the children and caretakers.

The women, who earlier used to leave their children unattended while going out for work, would stay back to attend their own and other children in the neighbourhood.

Since the caretakers are from amongst the families whose children are left behind with her for daycare, they are familiar with the habits and temperaments of the inmates, as they all come from a close cultural group. The crèche management has been planned like an extended family.

The crèche is located inside the locality or within 200m radius so that the parents can easily drop and pick their children.