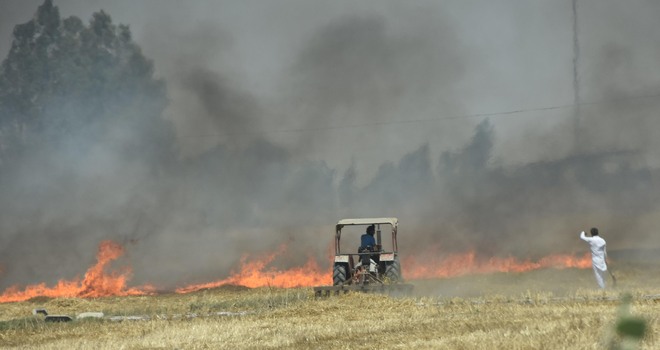 There is no let up in incidents of farm fires in Ludhiana district. With the crop residue burning cases touching a five-year high, the air quality in the state’s biggest and largest district in terms of area and population has also worsened, the official figures have revealed.

With this, the air quality has worsened and the widespread pollution has engulfed the industrial capital of the state under dense blanket of smog, especially during evening and morning hours.

On the stubble burning front as well, Ludhiana remained the fourth worst-hit district with 5,794 farm fires till Saturday. While Sangrur topped the state with the maximum of 7,991 crop residue burning cases, Moga stood second with 6,491 and Ferozepur ranked third with 6,254 stubble burning incidents this season so far.

On Saturday, only 10 farm fires were spotted in Ludhiana district, which were, however, relatively less than the trend witnessed during the past few days. Muktsar topped the state with the maximum of 53 crop residue burning cases followed by Fazilka 50, Patiala 33, Bathinda 21, Ferozepur and Sangrur 18 each, Fatehgarh Sahib 16, Faridkot 10, Amritsar and Jalandhar five each, Malerkotla four, Tarn Taran three, Barnala and Kapurthala two each, while Gurdaspur, Moga and Pathankot recorded the lowest of one stubble burning incident each on Saturday.

“We are forced to burn the crop residue as it was the most cost-effective and time saving mode,” reasoned Sulakhan Singh, a farmer of Baloke village.

Another progressive farmer Amar Singh of Dhandra village alleged that the government claims of providing machinery and incentives were only on the paper.

We have been motivating farmers against stubble burning, besides enforcing laid-down norms to keep the air pollution under control. Though all 968 village panchayats in the district resolve not to let anyone burn crop residue in their respective limits, key district functionaries have been deployed to prevent field fires and take action against offenders. These included eight SDMs, seven tehsildars, 160 patwaris, nine DSPs, 142 cluster officers, 390 nodal officers and nine AEEs of PPCB. —Varinder Kumar Sharma, DC