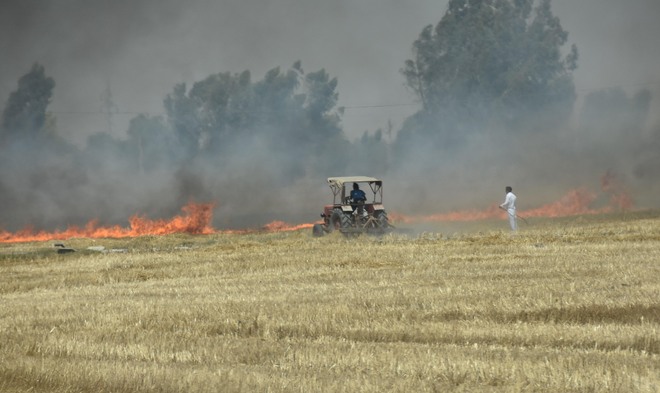 A farmer resorts to stubble burning in Ludhiana. - File Photo

As the current kharif season drew to a close on Tuesday, the farm fires remained at five-year high but less than the record high of 2016 in the district, official figures have confirmed.

We had spearheaded a mass public awareness campaign to educate the farmers against stubble burning and involved the village panchayats as well as primary agriculture cooperative societies in the efforts to check air pollution. Besides, 25 key district functionaries had been deployed to prevent field fires and take action against the offenders. – Varinder Kumar Sharma, DC

The raging fires in the agriculture fields made Ludhiana the fourth worst-hit district in the state with a total of 5,817 cases of crop residue burning recorded in Punjab’s biggest and largest district, in terms of area and population, till November 30. This was less than Sangrur, which topped the state with the highest of 8,006 stubble burning cases followed by Moga 6,515 and Ferozepur 6,288, the data compiled by the Punjab Remote Sensing Centre (PRSC) in Ludhiana has revealed. 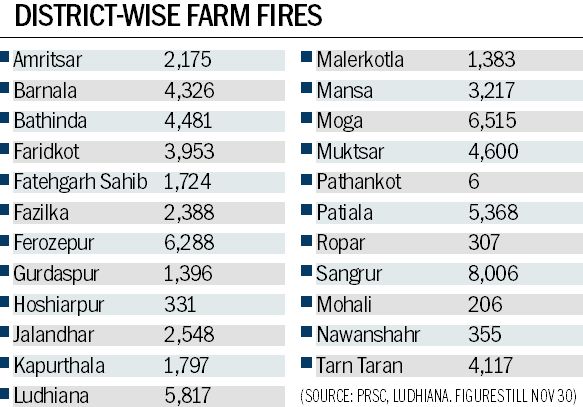 With this, the air pollution in the state’s industrial capital has touched a new high as the air quality index (AQI) went up to 242, which is a ‘very unhealthy’ level, on Wednesday. As PM 2.5 concentration in Ludhiana air remained the main pollutant, which is currently 38.4 times above the WHO’s annual air quality guidance value, Ludhiana was the third most polluted city in Punjab on December 1. Faridkot remained the most polluted city with highest AQI 357, followed by Jalandhar AQI 243.

The poor air quality has left the Maximum City of Punjab under a dense envelope of smog, especially in the morning and evening hours, with the rise in respiratory problems due to ‘very unhealthy’ AQI. 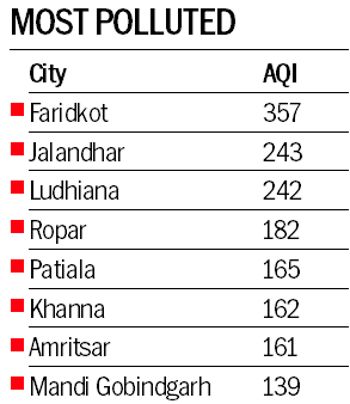 On November 30, which was the concluding day of the current kharif season, Ludhiana topped the state with a maximum of two fire events, while the state recorded a total of five cases, including one each in Fatehgarh Sahib, Gurdaspur and Kapurthala.

The impunity with which the crop residue burning continued this kharif season also belied the resolutions adopted by all 968 village panchayats in the district against stubble burning. In a first-of-its-kind initiative, all 968 villages covered under 941 panchayats and 367 primary agriculture cooperative societies (PACS) in Ludhiana district had before the start of the kharif season in September had resolved not to let anyone burn crop residue in their respective jurisdictions.

While farmers blamed the “inadequate and ineffective” facilities and arrangements made by the government to avert farm fires, the administration claimed that much awareness and enforcement measures were taken to contain the menace of stubble burning in the district this season.