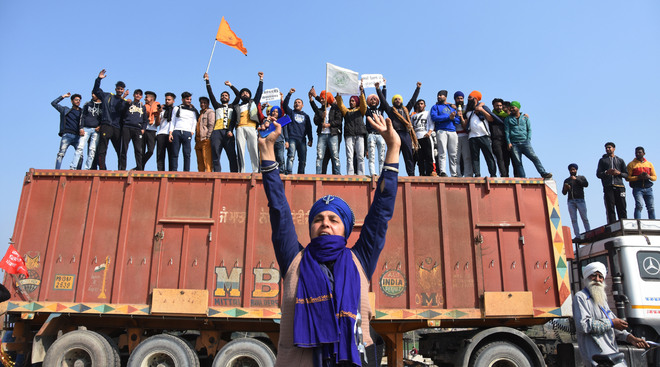 Rural women have geared well for their changing role in society. Himanshu Mahajan

The farmers’ protest has brought to light the role women can play in society at large. Normally, limited only to household work, their responsibilities changed overnight and they were forced to hold plough in their hands. Now, they are enjoying their new found responsibilities and freedom which according to them is going to stay. This year’s Women’s Day is going to be special for women belonging to the rural background with their changing role in society.

Rajwinder Kaur, from Nangal village, never went to her fields before the protest started. Although, a graduate she was happy staying back at home and doing household chores. “With men at the protest site, we were left with no other option but to work in our fields in order to sustain the family. Going to the fields was a compulsion for which later turned into necessity and now it holds our future,” she said.

The woman who never thought of going to the fields can’t think of a day without visiting her ‘karambhoomi’. Apart from that, they have been going to the protest site regularly.

“Till now, there used to be a two-crop pattern but now we plan to have at least four crops. There might be five crops but not less than four. Even when the men are back home, it will not hold us from going to the fields,” added Rajwinder.

The protest has also served as an eye-opener for some. Amritpal Kaur, a mother of two daughters and a son from Bahu Majra village, said the protest has proved to an eye-opener not only for her but for many other women like her. Even her husband was surprised when he came to know that she was managing all work single-handedly.

“Now, I will make sure that both my daughters are financially independent before marrying them. It was tough for me to go to the fields as I have never done this work before. It was the men of the family and hired labour who were responsible for doing the work in the fields and sometimes the work was delayed as no labour was available. Now, we don’t need to wait for the labour but can do our work ourselves,” she said.

Not only people from rural background but even those living in the cities have recognised the importance of this protest in context to role of women in society.

Dr Narinder Sandhu, principal (retd) of Ramgarhia Girls College, said the protest would prove as an orientation or refresher course for the women of the farming community.

Ravinder Ranguwal, a Ludhiana-based media director and president of Punjab Cultural Society, said the revolution caused by farmers’ protest is here to stay.

“The protest has added a progressive thought among the villagers. Few days back, I went to my village Ranguwal and the neighbouring Dhoorkot village and saw women were working in fields,” he said.

Is this freedom going to stay?

Dr Kamal Vatta, Professor, Head of Department of Economics and Sociology from Punjab Agricultural University, said there is no concrete view point on this till now.

“Long-term situations do result in changes but it is too early to say anything at this point of time. Whenever the equilibrium is disturbed it either results in a permanent change or sometimes things come back to the pavilion. Only time will tell what will be the result of the socio-economic impact of the protest,” said Dr Vatta.