Protest forcible acquisition of farmland for construction of highways 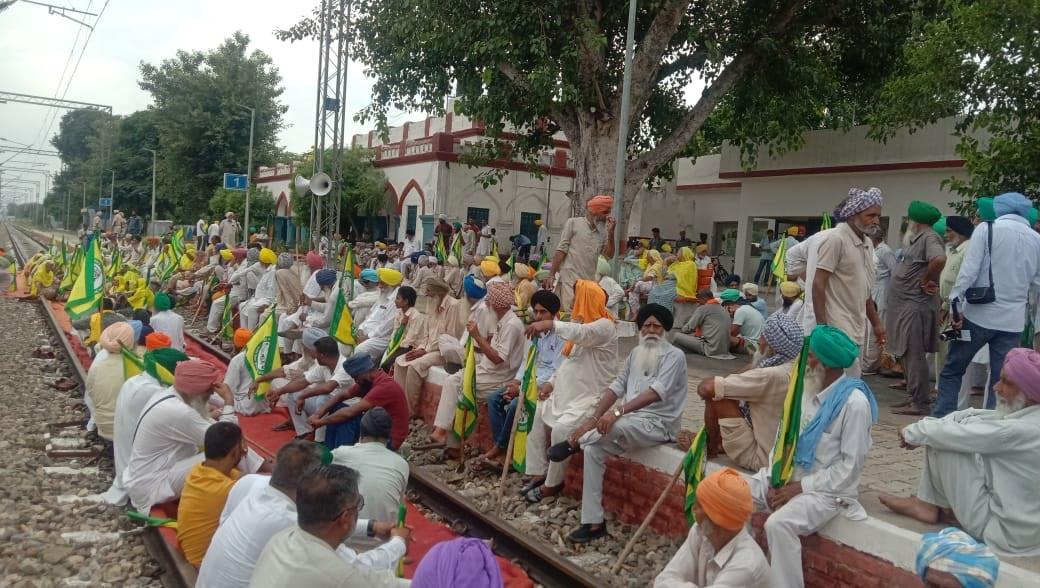 Farmers squat on the rail tracks during a protest at the Kila Raipur railway station near Ludhiana on Thursday. Tribune photo

District president of Bharti Kisan Union (Ekta Ugrahan) Sudagar Singh Ghudani said the AAP government was resorting to repressive measures and farmers were being harassed on various fronts. The government was closing its eyes to most of the crucial issues of farmers.

The protest was held against forcible acquisition of farmlands for construction of highways under the ‘Bharat Mala Project’ and other ‘anti-farmer policies’ of the government.

With protesters squatting on the railway tracks, the 11057 Mumbai CSMT-Amritsar Express, which was scheduled to arrive here at 12.55 pm, was delayed by over five hours as the train was detained on the Patiala-Dhuri section and resumed its onward run after 3 pm when the protest was lifted.

Addressing farmers and other protesters, district president of Bharti Kisan Union (Ekta Ugrahan) Sudagar Singh Ghudani said the AAP government in the state was resorting to repressive measures and farmers were being harassed on various fronts. There were widespread complaints from the farmers that in the name of restrictions on sand mining, farmers were not being permitted to take out sand and earth from their fields. To add insult to injury, several farmers in Bathinda district were booked under the sand mining laws.

He said the state government was closing its eyes to most of the crucial issues of farmers. Land was being forcibly acquired for construction of highways and farmers were being denied the market price for their land as per the commitment of the government. They were still being harassed for stubble burning whereas the government had failed on its part to lend a helping hand to them for stubble management.

He said the Prime Minister Narendra Modi-led Central Government had also betrayed the farmers and none of the promises made to activists of ‘Sanyukt Kisan Morcha’ at the end of the farmers’ year-long agitation had been fulfilled.

“The government has also backed out from its commitment to give due recognition to those killed during the agitation and no step has been taken towards providing legal guarantee to the MSP regime and culprits of the Lakhimpur Kheri massacre were still roaming free,” said Ghudani, while asking the farmers to be prepared for yet another agitation to get justice.