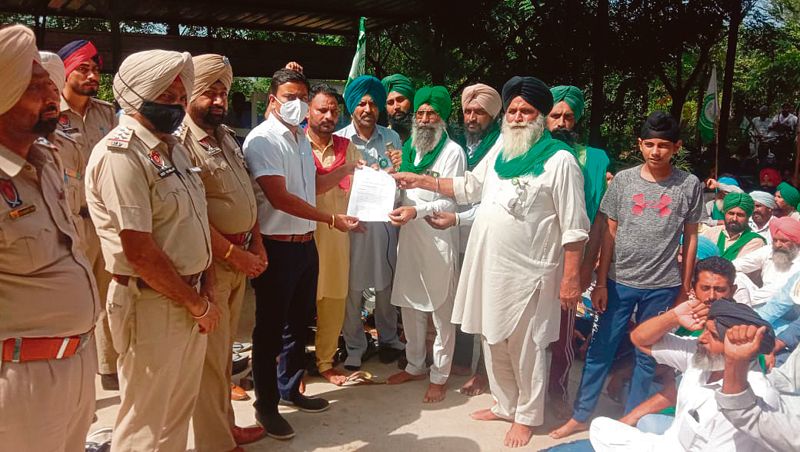 Protesters hand over a memorandum to SDM Himanshu Gupta at Raikot. Tribune photo

Terming the heart wrenching incident of brutal mowing down of farmers protesting in Lakhimpur Kheri district as a blot on the democracy of the country, activists of various farmer outfits urged the President of India to immediately dismiss the Yogi Government in Uttar Pradesh. Farmers demanded exemplary punishment for the accused, including Ashish Misra, son of UP minister Ajay Misra.

The protesters also paid tributes to deceased farmers by observing silence and holding candle marches at their respective places.

Vide memoranda submitted with senior functionaries of the administration, office-bearers of various farmer organisations demanded strict action against culprits and a Supreme Court monitored CBI probe in a time bound manner in the case.

All India Kisan Sabha leader Baldev Singh Latala informed that office- bearers and activists of the organisation led by Randhir Singh Dhesi organised protest march at Raikot and burnt an effigy of the UP Government on the occasion.

“The brutal incident of mowing down of farmers protesting peacefully in Lakhimpur Kheri on Sunday is a clear indicator that the government is bent upon torpedoing farmers, who are demanding repeal of the three draconian laws,” said Latala.

Activists of Bhartiya Kisan Union (Dakonda) led by Randhir Singh Dhaliwal staged a dharna, which was attended by activists of various constituents of the Samyukt Kisan Morcha. Later, protesters handed over a memorandum to SDM Himanshu Gupta.

The Naujawan Sabha Punjab, Zamhoori Kisan Sabha and Youth Wing of the Shiromani Akali Dal led by Harnek Singh, Jagtar Singh and Prabhjot Singh Dhaliwal held protests and candle marches at Kilaraipur, Dehlon and Jagraon, respectively. Speakers alleged that the Lakhmirpur homicide was geared up by top-rung UP leaders to destabalise peaceful struggle of farmers. — OC