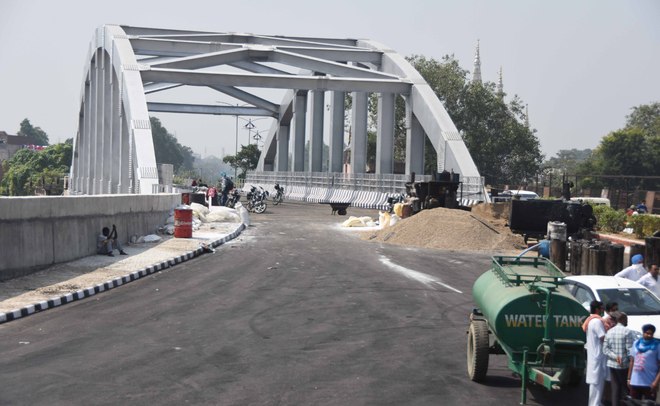 As road work on reconstructed Jagraon Bridge is nearing completion, it is likely to be officially opened to traffic in a day or two. The Railway officials are trying to complete road work by tomorrow (Tuesday).

Mayor Balkar Singh Sandhu had inspected the bridge yesterday and he announced opening of the bridge to the public. The bridge was opened for a short time for traffic movement but it was later closed as road work was incomplete.

Senior Section Engineer of Railways Gurdeep Singh said: “Work is being carried out manually as material for road work is prepared at the site. Moreover, work is done at night. We are making all efforts to complete road work by Tuesday. Once the work is finished, the bridge will be opened to traffic,” he said.

Sandhu said: “I have talked to railway officials and they assured me that the remaining work will be completed by Tuesday.”

Commuters to get relief from traffic-snarls

Comprising two parallel bridges, the Jagraon Bridge allowed to-and-fro movement of traffic between Bharat Nagar Chowk and Old City. The old bridge side connecting the Old City, Vishawakarama Chowk and other areas to Bharat Nagar, which was built in 1888, was closed for its reconstruction after the railway officials found that the bridge girders had been badly corroded. Since the old Jagraon Bridge side was closed, traffic snarls have been a common sight on the parallel bridge and other locations of the city. City-based NGOs had been observing the ‘barsi’ of closure of Jagraon Bridge every year since 2017. The project has already missed multiple deadlines.