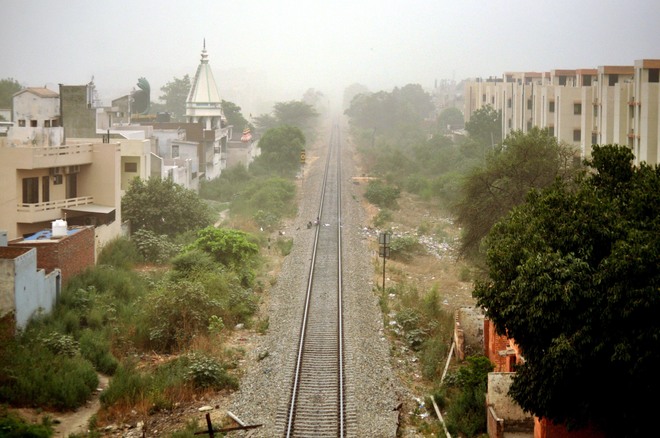 Finally, the Union Government has accorded approval to acquire forest land falling under the much-awaited project to double the Ludhiana-Mullanpur railway line, the government has confirmed.

The Union Ministry of Environment, Forest and Climate Change has granted in-principle approval for the diversion of 28.092 hectares of forest land to be acquired under the project.

The development assumes significance as the project was approved in 2019 but was awaiting clearance to acquire the forest land coming in the way for the past two years.

It was made possible after the then Chief Secretary, Vini Mahajan, had on August 25 directed the authorities concerned to issue the NOC for use of forest land forthwith.

Under the project, the 21-km-long railway line has to be doubled at an estimated cost of Rs 235 crore and will be completed by December 31, 2023.

In the approval issued on October 11, a copy of which is with The Tribune, the Regional Officer of the Union Ministry of Environment, Forest and Climate Change, CD Singh, has conveyed to the Additional Chief Secretary (Forests) that the use of forest land will be subject to certain conditions laid down for the acquisition of 28.092 hectares of forest land.

“After receipt of the compliance report on fulfilment of the conditions, the final approval order will be given under Section 2 of the Forest (Conservation) Act, 1980. The use of forest land will not be allowed till final approval is accorded,” the ministry official has made it clear.

The approval was granted after the state government had submitted an online proposal for seeking the NOC on September 10, and further replied to the query raised by the union ministry on October 5.

As per the orders of the Centre, the NPV of the forest land and all other CA levies will be deposited through a web portal of the Ministry of Environment, Forest and Climate Change.

The ministry wanted the Divisional Forest Officer to furnish undertaking that the approved CA site(s) will not be changed without the approval of competent authority.

The CEO, State CAMPA, will furnish undertaking that the funds under the State CAMPA will be released to Divisional Forest Officer as per approved the CA scheme.

The ministry also desired that the legal status of the forest land will remain unchanged and efforts should be made to fall the minimum number of trees, not to exceed 1,977 trees, which should be felled under strict supervision of the State Forest Department.

The other conditions included the forest land will not be used for any other purpose than that mentioned in the proposal, the forest land proposed to be diverted shall under no circumstances be transferred to any other agency, department, or person without approval of the Central Government, the layout plan of the proposal shall not be changed without the prior approval of the Central Government, no damage will be done to the adjoining forest land, and user agency shall obtain Environmental Clearance as per the provisions of the Environmental (Protection) Act, 1986.

Reviewing the progress of the project, the then Chief Secretary had appointed the Public Works Department as the nodal agency for the project. The PWD officials will coordinate to further send the requisite approvals of the state government to the Union Railways Ministry, she had directed.

The Union Ministry of Environment, Forest and Climate Change has granted in-principle approval for the diversion of 28.092 hectares of forest land to be acquired under the much-awaited project.