Bids for interim terminal building to be received by today 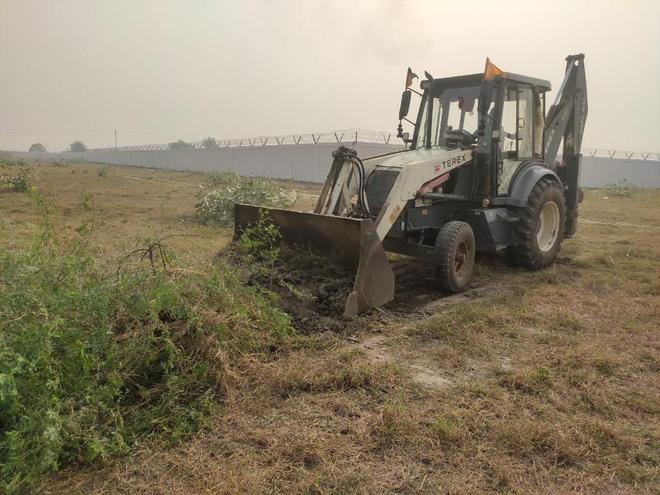 The construction of the airport link road and 2,333-metre-long boundary wall has been completed.

Finally, the work has begun on the much-awaited international airport at Halwara here, the administration has confirmed.

The international airport project has been taken up on a priority basis and all stops have been pulled out to ensure that it starts operations by June next. It will not only give a major boost to the economic development of Ludhiana but also improve the air connectivity of the industrial capital of the state, besides attracting more investment and jobs for Punjab’s business and industrial hub. Charanjit Singh Channi, CM

While the construction of an internal approach road, taxiway, car parking and apron has kicked-off, bids for developing the interim terminal building will be received till Tuesday, officials have said.

The development assumes significance as the much delay in the final approval from the Airports Authority of India (AAI) had already missed the January 2022 deadline earlier set by the state government to make the airport operational.

It was on October 22 that the AAI had accorded a formal nod to the construction of a new interim terminal building for the upcoming international airport at the cost of Rs 4,691.12 lakh.

Deputy Commissioner Varinder Kumar Sharma told The Tribune here on Monday that the last date for receiving bids on tender for the construction of the interim terminal building was extended from earlier fixed November 17 to November 23.

“The last date was extended following a lukewarm response from prospective bidders and enabling a couple of them to complete formalities, which they were facing due to some technical glitch,” shared a senior officer involved in the bidding process.

Received bids will be opened on November 24 and the construction work for the interim terminal building will begin by December 15.

The project entails construction of the interim terminal building spread over 2,000 sq m area with other associated works ,including construction of apron, taxiway, car parking and development of internal approach road.

Sharma, who has been reviewing the progress of the project on a daily basis, said a six-month deadline had been fixed for the construction of the interim terminal building and associated works, to be completed till June 30 next year.

According to the AAI nod, the interim building will be constructed by the state government through the state government funds, which will be reimbursed to Punjab or its designated agency by the AAI after monetisation of its land at the existing Sahnewal airport in Ludhiana.

Already, the construction of the airport link road and 2,333-meter-long boundary wall has been completed.

In a bid to give a boost to industrial and economic activities in the state, the state government and the AAI are jointly setting up a new international civil terminal at the Air Force Station in Halwara, which is one of the oldest frontline airbases of the Indian Air Force (IAF), close to Ludhiana.

Ludhiana, which is Punjab’s largest industrial and business city with a population of nearly 4-million, is at present serviced by a small domestic airport at Sahnewal, which will be shut once the new international airport begins operations. Ludhiana also has the advantage of being at the geographical centre of the state.

While the work on the construction of 3-meter-high with 660-mm thick punch tape concertina and barbed wire fencing has been completed by the PWD (B&R) at the cost of Rs 301.16 lakh provided by GLADA, the widening and strengthening of the existing 5.1-km link road from Aitiana village to international airport from existing 10-feet to 18-feet width has been completed by the Punjab Mandi Board at the cost of Rs 8.17 crore. The work also included construction of two bridges, each of 8-meter span, on the Halwara drain.