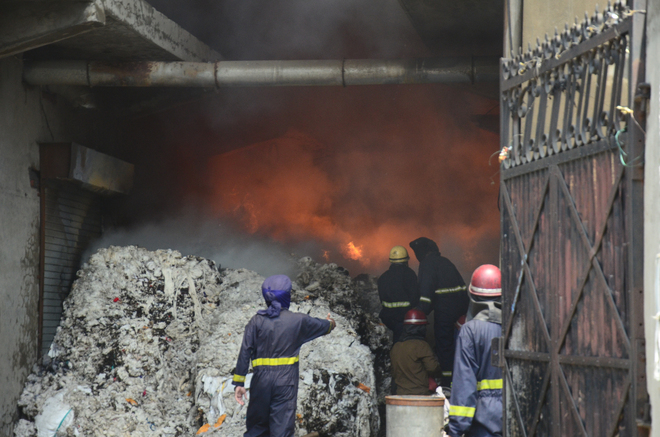 Firemen try to douse the flames at the mill near Cheema Chowk on Sunday. Tribune Photo

A major fire broke out at the two-storey RT Woollen Mills in Industrial Area A on RK Road, near Cheema Chowk, this afternoon. Goods and machinery worth lakhs were destroyed in the fire.

A short-circuit was said to be the cause of fire. Fire engines from all five fire stations on Humbran Road, Gill Road, Focal Point and Sunder Nagar were pressed into service.

The fire team was led by Srishti Nath Sharma, fire station officer. Sharma said a fire call was received at 12.25 pm. The fire engines reached the spot within 10 minutes and started firefighting operations.

According to factory owner Deepak, a huge stock of finished goods was reduced to ashes. The loss could be in lakhs. The factory was closed which prevented the loss of human lives.

Deepak said since the factory was closed, he was informed about the fire by the owner of a neighbouring factory.

The walls developed cracks and the fire officials feared that the factory might collapse. The walls of migrant quarters also developed cracks. The migrants came out of their rooms for a precautionary measure.

When the fire was controlled after a few hours, the factory workers broke a window of the office and removed important files, computer and other equipment from there.

The fire official said there were no fire arrangements at the factory. Although a few fire extinguishers were lying in the factory, those were not enough to douse the flames. The fire engines fetched water from the Cancer Hospital Chowk.

Chief Minister Capt Amarinder Singh Tweeted about the incident: “I have directed the Ludhiana DC to look into the reasons behind the fire that broke out at RT Woollen Mills today. Luckily, there have been no casualties. The fire department took prompt action and prevented the fire from spreading and causing more damage.”