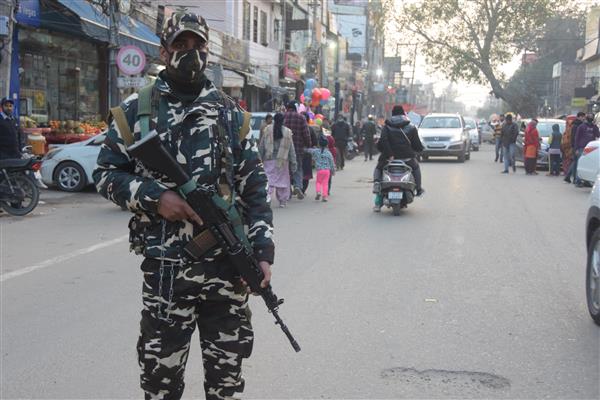 A paramilitary jawan deployed at a market ahead of the Assembly elections in Ludhiana. Photo: Ashwani Dhiman

The first-timer Aam Aadmi Party (AAP) had sprung a surprise by winning three Assembly seats in Ludhiana, the state’s biggest district, in terms of the area and population, in its maiden electoral battle during the 2017 Vidhan Sabha elections.

However, it was left with just one MLA at present after one of its legislators – Harvinder Singh Phoolka from Dakha resigned in 2018 – while another MLA Jagtar Singh Jagga Hissowal from Raikot switched over to the ruling Congress in November last.

In the 2019 by-poll, necessitated due to Phoolka’s resignation, the state’s principal Opposition party’s nominee Amandeep Singh Mohie could not even save his security deposit as he got only 2,804 votes, which were not even one-sixth of the total polled votes.

The Shiromani Akali Dal (SAD) candidate, Manpreet Singh Ayali, who lost to Phoolka in 2017, emerged victorious in the by-poll.

Delhi Chief Minister Arvind Kejriwal-led party’s nominees had ended runners-up on six other Assembly constituencies in the district, which sends 14 MLAs, maximum in any district and almost 12 per cent of the total 117 legislators in the state, in the 2017 polls.

Of the three AAP MLAs, who won in the last Assembly elections, Saravjit Kaur Manuke had registered the highest victory margin of 25,576 votes and defeated the Congress heavyweight Malkit Singh Dakha in her first electoral battle from Jagraon.

She was rewarded with the post of Deputy Leader of Opposition in the Punjab Vidhan Sabha. Manuke polled 61,521 votes while 35,945 votes were cast in Dakha’s favour.

Taking lead in allotting party tickets for the February 14 Vidhan Sabha elections, the AAP has so far announced candidates for 12 of the total 14 Assembly seats in Ludhiana district, which is one of the major parts of the state’s Malwa region, located south to Sutlej river, which makes up majority of the Punjab region consisting 12 of the total 23 districts.

However, the state’s main Opposition party could not yet decide the candidatures for Ludhiana (West) and Dakha, which were among only eight Assembly seats from where the AAP had so far not announced its nominees for the next Vidhan Sabha elections.

While the failure to retain two of its three elected legislators, feel political observers, what they say was seen as the “main debacle” of the Kejriwal’s outfit, the party cadres claim they are poised for a “clean sweep” this time following the “disenchantment” of the electorates with traditional parties.

“This election, people will give us a chance to bring a change in the state’s political system,” said the party’s firebrand leader Manuke, who claimed that the AAP would win maximum seats from Ludhiana during this polls.