The incident took place on September 30, victim succumbed to injuries on October 12 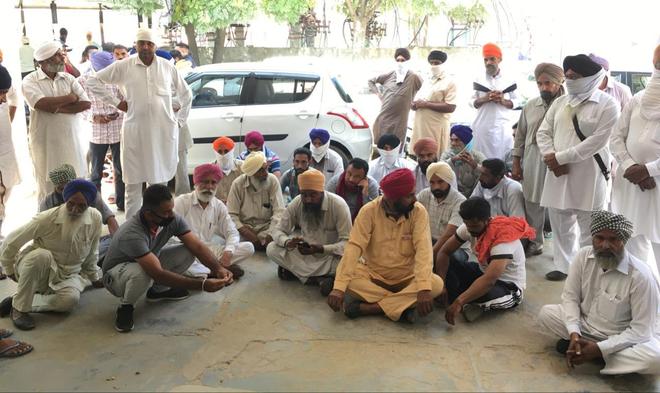 Kalsian villagers protest in front of a police station in Raikot on Thursday. Tribune photo

The police have booked five employees of a liquor vend situated near Hari Singh Nalwa Chowk, for murder of an environmentalist of Kalsian village who was assaulted by the accused a fortnight ago.

Though the incident took place on September 30 and the victim Jasvir Singh died on October 12. A formal case was registered after the deceased’s father Lachhman Singh returned from abroad and villagers organised a protest dharna in front of a police station yesterday.

The accused have been identified as Balwinder Singh, Manoj Kumar, Sukhdev Singh, Anmol Singh and the manager of the vend whose identity was yet to be ascertained.

Investigations revealed that Jasvir Singh was thrashed by the accused when the former was planting saplings near a liquor vend situated near Hari Singh Nalwa Chowk on September 30.

He was admitted to the local Civil Hospital from where he was shifted to the PGIMER, Chandigarh. The victim succumbed to his injuries on October 12.

Darshan Kaur, deceased’s mother, alleged that the police had failed to lodge a complaint even though the matter was reported on the day of the incident.

The deceased’s father returned to India on Wednesday after which villagers led by Sarup Singh Kalsian organised a dharna to protest alleged inaction by the police against the accused.

An FIR under sections 302, 148, 149 and 120B of IPC was registered against the accused. Raikot DSP Sukhnaj Singh claimed that the Raikot police had visited the PGI, Chandigarh, and also the residence of the victim several times to record his statement but doctors had not declared him fit to submit the statement.