For years, no proper roads in Ward No. 28 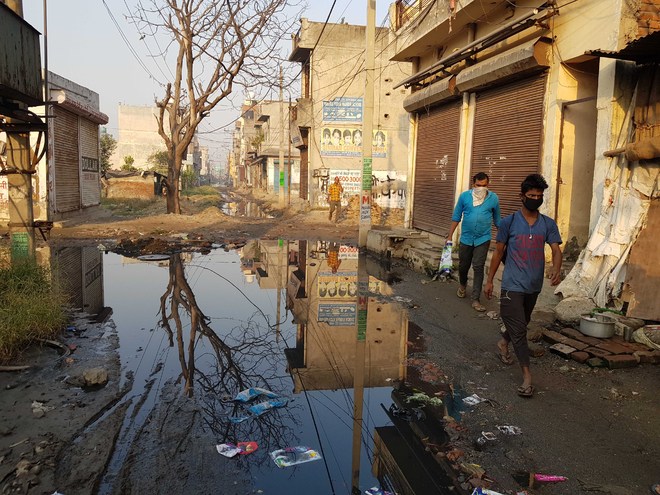 Roads in Ward No. 28 have not been constructed for a long time. Overflowing sewage is a common sight here. Tribune Photo

Big dreams are being showcased to develop some selected areas here under the “Smart city mission”, but a number of city areas, especially located in the outer wards, are crying for attention due to the lack of development.

Years have gone by, but many roads and streets have not been constructed in Jagdish Colony, Ishwar Colony, Prem Nagar, Deep Colony and nearby areas of Dhandari Khurd in ward No. 28 despite repeated demands of residents.

When the last MC elections were held in 2018, residents had pinned their hopes on the construction of roads and streets in their respective areas, but to no avail.

Adding to the woes of the residents, the MC has even failed to solve the chronic problem of overflowing sewers in these areas. It is even difficult to walk on many roads and streets flooded with stinking sewer water. Thus, filthy conditions keep haunting the residents all the time.

Ravi of Jagdish Colony said, “I have been living here for the past several years, but a number of roads and internal streets have never been constructed in our area till date. A large number of people living in our area are labourers. The situation has become worse as it is even difficult for us to step out of our houses. The government pays no attention towards the poor condition of the roads and overflowing sewers. If sewers were earlier installed, it was the responsibility of the civic body to make sure their proper functioning. Neither the problem of overflowing sewers has been solved, nor have the roads been constructed.”

Rajinder Gupta, a resident of Deep Colony, said, “I have been living here for more than past two decades. The streets have not been constructed in Deep Colony. However, interlocking tiles were installed in some streets of nearby areas a few years ago. The sewerage was laid in the area a long time ago, but it often remains defunct. The civic body should also resolve the problem of overflowing sewers on a priority basis.”

Despite repeated attempts, the councillor of ward No. 28 Paramjeet Singh could not be contacted for comments. MLA Sharanjeet Singh said he had raised the matter regarding the Dhandari Khurd areas with the authorities many times, but no action was taken by them. He blamed the Congress government for turning a blind eye towards the poor condition of the roads.

MC’s SDO B&R, Harjeet Singh, said the Ludhiana Improvement Trust had earlier got installed interlocking tiles in several areas of ward No. 28. “There are a number of streets that are still undeclared. If the councillor concerned brings the matter regarding undeclared streets to our notice, we will get these declared from the drawing branch and then make estimates for the construction of streets.”

The MC had announced to upgrade the sewer lane in Prem Nagar, Jagdish Colony and “Masjid wali gali” near Deep Colony last year, but the project has not been started till date.