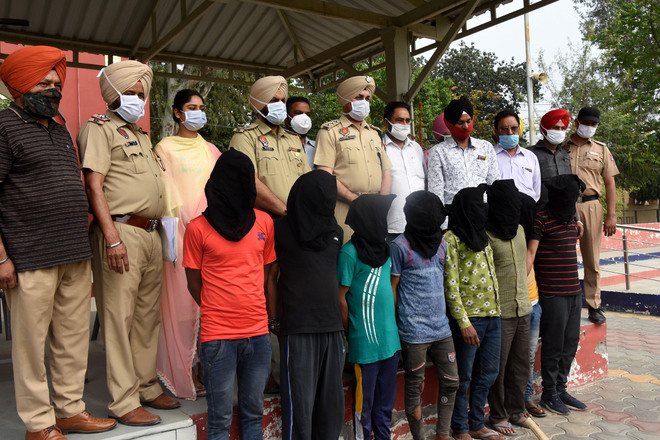 Members of the gang in police custody in Ludhiana. Tribune photo: Himanshu mahajan

An interstate gang stealing cables of Bharat Sanchar Nigam Limited (BSNL) has been busted by the CIA wing of the city police and eight members have been arrested.

Three accused, namely Sanjit of east Delhi, Gajinder Mahato of Gurugram, and Iqbal Kabaria of Delhi are still at large.

The police recovered a Mahindra Bolero vehicle, which was being used to transport stolen cables, fake approval certificate from BSNL, seven jackets, instruments used to dig roads, and 65 kg telephone cables from the gang members.

Bhatti said the gang had committed six thefts in Ludhiana, two in Amritsar and one in Jalandhar.

During probe, the police found that Rajinder and Sanjit were the kingpins of the gang. The members used to come all the way from Delhi to Punjab to steal BNSL cables. The gang had also made a fake permission letter of BSNL and whenever they stole cables, they wore proper clothing to give the impression that they were workers of BSNL.

The gang had been selling stolen cables to Iqbal Kabaria, who is a junk dealer in Delhi, added ADCP Bhatti.