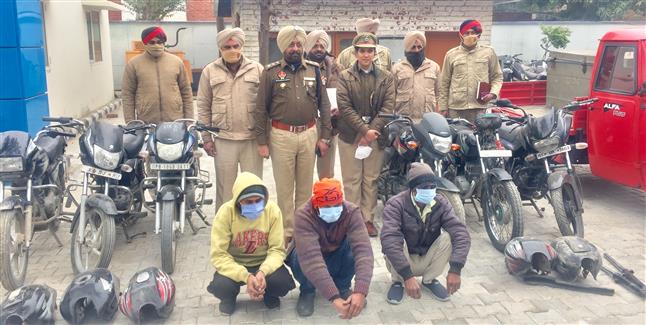 Thieves in police net along with stolen vehicles at Ahmedgarh.

The police claimed to have busted an interstate gang of miscreants that had been involved in stealing vehicles and selling their parts after dismantling them.

Eleven motorcycles, six intact and five dismantled, one Tempo used to carry stolen material and equipment used to dismantle motorcycles were seized from the possession of three miscreants arrested from separate places.

Senior Superintendent of Police, Malerkotla, Dr Ravjot Kaur Grewal a police team, supervised by DSP, Ahmedgarh, Harvinder Singh Cheema and led by SHO, City, Arashpreet Kaur Grewal, busted the gang of miscreants that had been involved in stealing old motorcycles from the region and selling the re parts at throwaway prices after dismantling them at a workshop owned by a scrap dealer. The police are yet to ascertain whether documents of the dismantled motorcycles were destroyed or used for some other purpose.

“It was during a special campaign launched during the ensuing Assembly elections that we intercepted kingpin of the gang Balwinder Singh during a naka laid at Jandali Road, Ahmedgarh. Intensive investigation of Balwinder Singh revealed the identity of two more members of his gang, who were arrested from separate places later,” said Grewal.

Though the police are yet to ascertain criminal records of the thieves they confessed having stolen 18 vehicles during past months.