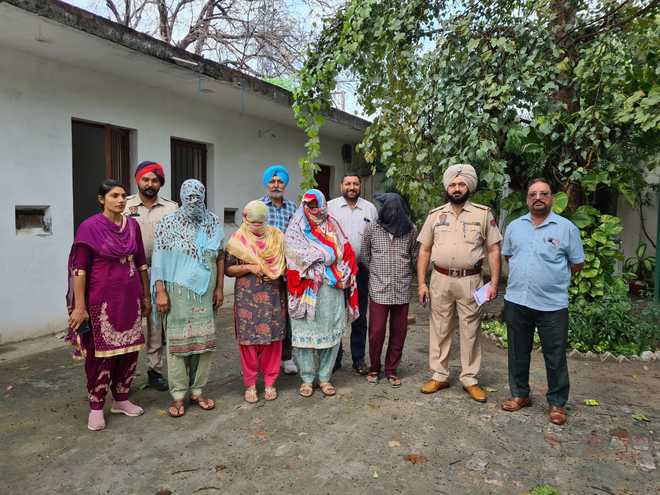 The four members of the snatchers’ gang in police net in Ludhiana on Monday. Tribune photo

The police busted a gang of women snatchers, believed to be involved in over 100 incidents of snatchings at different places in Punjab and Haryana. Four members of the gang, including three women, have been arrested. A large number of snatched gold ornaments and a Maruti Swift car used for committing crimes were seized by the police from the arrested persons.

Addressing mediapersons, Commissioner of Police (CP) Gurpreet Singh Bhullar said that Jeeto, the kingpin of the gang, has already been facing four criminal cases registered at various police stations across the state and she was also a proclaimed offender. Goga is wanted in six criminal cases. Rajji has been nominated in one case, while three cases are already registered against Sukhchain Singh.

Disclosing the modus operandi of the notorious gang, the police chief said Jeeto, along with Goga and Rajji, used to lure elderly women, especially on the pretext of offering them lift, or else engage the victims in a friendly conversation, claiming to be their acquaintances or those of their relatives. “During the travel time or after engaging the victims in conversation, the gangsters used to take away the gold ornaments or other valuables from the victims,” he added.

During preliminary interrogation, the gangsters revealed that they had committed more than 100 snatchings in Ludhiana, Jalandhar, Amritsar, Kartarpur, Moga, Khanna, Jagraon and Hoshiarpur district in Punjab and some more in the adjoining state of Haryana.

Bhullar said a team of CIA staff -I was entrusted the task of nabbing the gangsters after a spate of snatching incidents with the same modus operandi in different parts of the city. After a tip-off, the police laid a trap at Goanspur village in Malerkotla district where the gangsters were apprehended.

According to the CP the women gangsters and their accomplice were involved in 11 cases of snatching in the jurisdiction of Ludhiana Commissionerate and with the busting of this gang all these cases were solved.